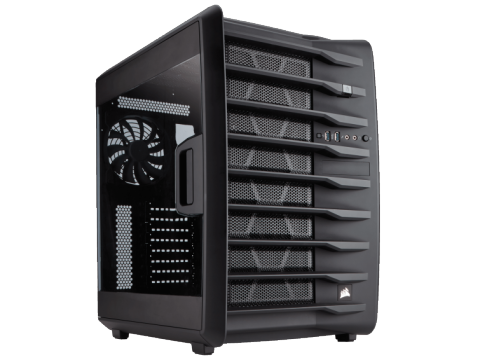 The Carbide Air 740 is an unusual find for builders who want to mount three large radiators. Other buyers will want to compare its features and price to other designs before making their purchase decisions.

The Carbide Air 740, Corsair’s latest semi-cubical case, builds upon the dimensions of its Carbide Air 540 to bring us room for more fans and larger radiators. The 740 model’s height grows by around 4", with only a fractional increase in width, making it even less of a cube than the 540 that preceded it. Function dictates form, apart from some aesthetic elements of its skin. The left-panel release latch is both functional and aesthetic.

Bars between the grills may be considered functional since they protect the mesh from dents, but they are primarily aesthetic. The ultra-glossy acrylic window is a pure visual delight.

Front-panel ports are located at a convenient height for both desktop and floor placement, as long as your chair sits low to the floor. A mystery panel beneath the two USB 3.0 ports and headset jacks hides nothing of interest, although Corsair does add a somewhat-interesting LED switch next to the audio jacks.

Around back we find a few 80mm fan mounts—which Corsair never bothers to mention—in addition to eight expansion slots, which allows builders to place a double-slot graphics card in an ATX motherboard’s bottom slot. That extra slot means the Carbide Air 740 is large enough for an XL-ATX motherboard, since it’s also deeper than ATX internally.

With 13.1” of card clearance behind the fans and a flat motherboard tray that extends all the way to the front panel, the Carbide Air 740 is, in fact, large enough internally to hold a full EATX (13” mounting depth) motherboard. Of course it doesn’t have all the holes for a fourth column of standoffs, but most of the enthusiast-class boards that receive an EATX label are far too shallow to reach that front column of standoffs. Its additional passages offer easy cable access with oversized motherboards installed, but the lack of an EATX label is certain to create arguments between in-the-know builders with 10.6”-deep boards and know-it-alls who argue that because of the labeling, this is not a proper EATX solution.

The Carbide Air 740 includes a pair of 140mm fans, just like its smaller 540-model sibling. It’s added height provides room for three 120mm fans, with added space on top to make room for overlapping top-panel and front-panel radiators. Only the front panel gets a true dust filter, with remaining fans relying only upon the case’s screened mesh fan grills for dust control.

If top and front radiators aren’t enough to suit your needs, another radiator can be fit on the Carbide 740’s bottom panel. Like the top, it's drilled and slotted for two fans in both 140mm and 120mm sizes.

Like all of the other outer panels, the Carbide Air 740’s base slides off after removing two thumb screws. Panels aren’t interchangeable however, due to the case’s asymmetric fan mounts.

The Carbide Air 740’s Other Half

Corsair avoids any complaints about the space behind the motherboard tray by putting the entire power supply back there, along with a couple drive racks. Power supply depth is virtually without limit, since we’ve never seen a PS/2-derived unit that approached the case’s 14” internal depth.

A three-drive tray behind the front panel holds 3.5” drives upon silicon-damped pins and provides screw holes for installing 2.5” drives.

Four more 2.5” drives can slide into a mount above the power supply, to be secured via large plastic barbs.

A bracket along the Carbide Air 740’s bottom can provide additional security for a power supply, although none of its positions aligned correctly with our test unit. Perhaps it’s designed instead around the dimensions of Corsair’s power supplies?

The Carbide Air 740 includes several fan and radiator screws, in addition to the screws required for motherboard and drive mounting.

The Carbide Air 740 skips the messy AC-97 audio adapter in favor of a tag-free HD Audio connection. Its power LED cable is split to support both ATX and AT-form-factor motherboards: In case nobody got the joke, Asus reverted to legacy 3-pin spacing back when most cases still had AT-style solid 3-pin power LED connectors.

The Carbide Air 740’s layout looks a little unusual, but the motherboard and power supply screw in as they would in any traditional design. Several inches of space surround a standard ATX motherboard.

Next Page Test Methods, Results, And Final Analysis
31 Comments Comment from the forums
Be In the Know