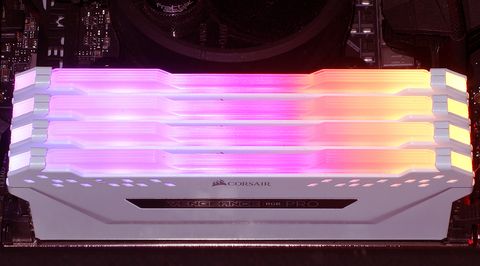 Superb performance and moderate pricing earns the Vengeance RGB Pro DDR4-3200 our Editor's Choice Award for RGB-equipped memory, though its pastel colors might be off-putting to a few builders.

Builders who put a premium on aesthetics often face a tough choice between the best-looking and best-performance parts. Corsair brings a bit of both in its Vengeance RGB DDR4-3200 kit, providing four 8GB DIMMs (32GB total) at CAS 16 timings for a price that’s reasonably moderate given recent market trends. And this kit isn't all about looks; it has the goods where benchmarks are concerned, too.

First, some memory basics background is in order. Latency is measured in cycles, and latency time is the inverse of frequency. Lower is better when it comes to latency. So for instance, DDR4-3200 CAS 15 would be better (fewer wait cycles) than CAS 16 at DDR4-3200, which happens to be our performance baseline, as well as the spec of this particular kit. DDR4-3200 CAS 17 would be worse (more wait cycles) than our baseline. In other words, Vengeance RGB Pro DDR4-3200 buyers get the extra bandwidth of its high data rate without suffering any additional lag.

The full 16-18-18-36 primary timing set of this kit is par for CAS 16 memory at nearly any data rate; some of Corsair’s competitors are using similar timings at DDR4-3000 and even DDR4-2666. You’ll still need a board that supports XMP memory mode to configure these settings automatically though. The highest non-XMP configuration is a comparatively pokey DDR4-2133.

Of course, you wouldn’t pay for the kit's RGB feature unless you planned to use it. The default lighting scheme is an unsynchronized pastel RGB wave. But changing it is as easy as downloading Corsair’s free iCue app. Alternatively, the LEDs are also addressable from motherboard RGB software, such as MSI’s Mystic Light.

Choosing your lighting control can be complicated, because Corsair’s application incorporates support for other Corsair devices, but doesn't address the motherboard’s lights. Meanwhile, motherboard-based RGB controls typically work only with onboard lighting, RGB DIMMs and standard lighting strips. Clearly we're no where we ought to be in terms of RGB synergy.

You might notice that two comparison kits in the middle of our charts are from the same company and lack buy buttons. The $500 Spectrix D80 configuration is only available in U.S. as two $250 two-DIMM kits, and you can only get the $374 Spectrix D40 configuration as two $187 two-DIMM kits. But that didn't stop Adata from shipping them to us as a four-DIMM kit and asking us to test them as such. Meanwhile, the exceptionally overclockable HyperX Predator RGB sits at the end of our comparisons, due to its slower rating.

The spoiler in today’s minimum primary timings test is that the Vengeance RGB Pro DDR4-3200 didn’t reach DDR4-4000. It reached the same DDR4-2400 timings as Adata’s DDR4-3600, but even stepping from DDR4-2400 to DDR4-2666 required a jump to the slower 2T setting for stability. At this point, hopes for competitive performance rest with automatically configured advanced timings.

We’re not surprised to see Sandra’s bandwidth scaling for our RGB samples matching the kit's XMP data rates, even though the bandwidth benchmark is also affected by latency. The surprise instead occurred at DDR4-3733, where the Vengeance RGB Pro’s CAS 17 timings somehow produced more bandwidth than the Spectrix D80’s CAS 16. Those findings were repeated in Sandra Latency, so this could be Corsair’s advanced configuration for the win.

F1 2015 and 7-Zip represent the few applications that are excessively impacted by DRAM performance, whereas Metro Last Light Redux and Blender CPU Render represent typical apps that are only really harmed by truly poor memory configurations. The Vengeance RGB Pro trailed Spectrix D80 in F1 2015 except for at DDR4-3200, but it had the shortest compression times at every speed in 7-Zip.

We previously awarded the HyperX Predator RGB DDR4-2933 (4x 8GB) for its outstanding overclocking capacity. But Corsair’s Vengeance RGB Pro beat the HyperX product in overall performance at every speed, barring the DDR4-4000 setting that it didn’t reach. Corsair also provides a better-performing XMP value and a lower price than the HyperX kit, making the Vengeance RGB Pro the uncompromised winner here, and an excellent addition to your next RGB build.