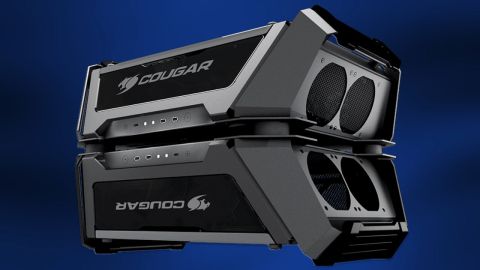 Included accessories for the Cougar Gemini X are pretty sparse given the case's high price. You get cable tie downs, various screws, four fan filters and a printed manual.

The case is divided into two separate compartments, a primary side that is able to accommodate an ATX system build with graphics cards up to 13.77 inches (350mm), and a secondary side that supports mini-ITX motherboards and graphics cards as long as 12.99 inches (330mm). Both sides can be equipped with air coolers up to 5.51 inches (140mm) tall.

The primary side of the Gemini X features five large laser-cut cable passages in the motherboard tray and five smaller holes for fan, power and SATA cables. The eight expansion slots will accommodate graphics cards up to 12.99 inches (330mm), even in multi-GPU configurations. The large hole behind the CPU socket area, designed to make heatsink changes easier by eliminating the need to remove the motherboard, is blocked by the secondary chamber. Obviously, this means the motherboard has to be removed to install a new CPU cooler. The pass through holes in the upper-left corner of the motherboard tray enable users to route the ATX12V/EPS12V power cable and fan cables to the power supply in the secondary compartment.

The secondary side of the Gemini X is specifically designed to fit mini-ITX motherboards. But due to the poorly designed layout, there are a number of fitment issues that left us scratching our heads. Water cooling aficionados will be disappointed to learn both power supply locations block the use of radiators and all-in-one coolers in this compartment.

The power supply for the main compartment blocks access to the 2.5-inch SSD-mounting locations. We found it necessary to remove the PSU or the drive cage to remove a 2.5" drive. Adding an SFX PSU prevents the installation of graphics cards with thick heatsinks. And cable management between the two compartments is messy at best. Additionally, routing cables for you graphics cards, power supplies, USB devices, Ethernet, etc. is frustrating to say the least.

As previously mentioned, both drive racks (four 2.5inch and four 3.5-inch) are located in the secondary compartment. Drives simply bolt directly to the metal racks without any vibration damping whatsoever. It should also be noted that installing 3.5-inch drives took a considerable amount of effort due to the tight fit. We found it easier to loosen the top screws as far as possible before attempting to install our drives.

We've said it before and we're going to keep saying it: It's disappointing to come across a chassis, especially one this expensive, that doesn't ship with any fans. Of course, this can easily be remedied at an additional cost, and enthusiasts often prefer to install fans of their choosing anyway. But it is inexcusable not to include fans with a case that costs well above $500. Including the two rear mounts, the Gemini X can be equipped with up to ten 120mm fans, so bringing your own can really add to the overall cost. Fan orientation is also very important so that the intake fans feed the exhaust fans, regardless of case orientation (horizontal or vertical).

We tested standard ATX power supplies up to 220mm in length for the primary side and found that anything above 160mm caused clearance issues with the 2.5-inch hard drive rack. Because of the cable clutter in the area between the PSU and hard drives, we seriously recommend the use of fully modular PSUs here. As previously mentioned, SFX power supplies can block GPU's with dual slot or larger coolers, and both power supplies interfere with the installation of radiators within the secondary chamber.