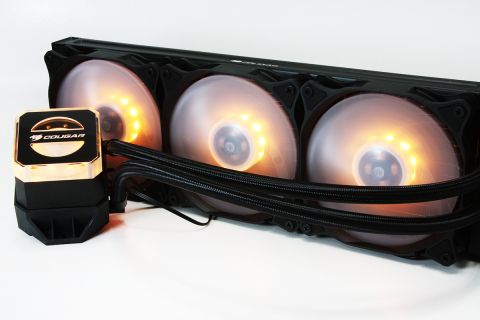 We’re going to take a closer look at the performance of the Cougar Helor 360 by evaluating the cooler against peer 360 AIOs in the Cooler Master Master Liquid ML360R RGB, the Cooler Master Master Liquid ML360P Silver Edition and the NZXT Kraken X72. The quartet of 360mm AIOs have each been tested on our Intel Core i7-5930k overclocked to 4.20Ghz @ 1.20v on the MSI X99S XPower AC motherboard, loaded up with 16GB of Crucial Ballistix Sport memory, all nestled within our Corsair Graphite 760T chassis.

Fan and pump speeds provide us with a technical look at what is under the hood powering each cooler in the test group, although pump RPM does not necessarily provide anything other than information, since we do not know actual flow rates of each. Fan RPM, however, gives us good indication on performance and noise level as all four coolers make use of 120mm parts.

Registered noise levels often shows slower fan speeds provide lower decibel levels, however this isn’t the case with the Cougar Helor 360 as it creeps into sound levels offered by others in the testing group running higher RPM fans. Meanwhile, the Cooler Master ML360P Silver Edition shows another level of quiet using fans only just slightly faster than the Helor 360.

Despite having a close thermal load performance grouping, the differences in noise level are amplified between minor differences in degrees Celsius on our load test observations and various differences in decibels on our acoustics chart. Acoustic efficiency calls to light the benefits of low-noise levels for lesser-performing thermal cooling tests, while noisier fans detract from better-performing coolers to provide some equilibrium to the comparison quartet.

Priced at $160, the Cougar Helor 360 swings near the low end of our testing group unit cost, bested only by the Cooler Master ML360R RGB at $140. Comparable thermal performance and noise levels make this group of four 360 AIOs user preference based on cooler presentation, aRGB/RGB lighting functionality and ultimately cost.

Thermal imaging from our FLIR ONE Pro camera shows some slight heat soaking at 50% fan speed in both the radiator sides and end tanks as well as a bit more through the coolant tubing compared to 100% fan RPM. At full speeds, the radiator and coolant return line appear to effectively dissipate thermal loads by our overclocked i7 CPU.

Providing brilliant aRGB lighting and comparable thermal load effectiveness, the Cougar Helor 360 represents a viable 360 AIO option in the vast oceans of available cooling options while remaining financially attractive in the marketplace. It might not boast as many secondary features as other 360 AIO solutions, but the Cougar Helor 360 does offer marked simplicity, value and solid performance for those seeking alternatives in liquid cooling.