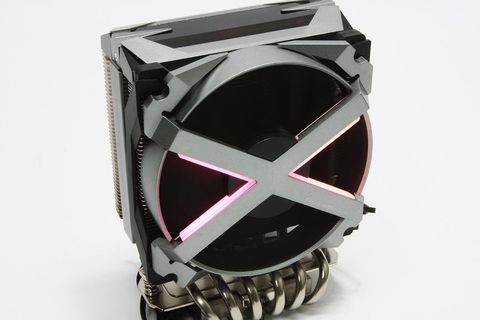 To provide more definitive thermal testing, we brought our socket TR4 cooling hardware to a testbed featuring a Threadripper 2990WX overclocked to 3.4GHz and 1.20v on a Gigabyte X399 Aurous Xtreme motherboard. This also meant re-visiting some of our recent Threadripper cooler tests conducted using an eight-core AMD Ryzen Threadripper 1900X and running them once again on the new 2990WX setup for updated comparison results. Our comparison sample includes a pair of Noctua coolers in the NH-U12S TR4-SP3 and NH-U14S TR4-SP3, as well as the formidable Enermax Liqtech 360 OC TR4.

Right away, we see the almost-linear stagger between each of the coolers under load using Prime95 to load all 32 cores and 64 threads of the 2990WX. The Fryzen trails the other coolers in the comparison group. Right away, fan speed becomes the focus.

Spinning up the fastest rotating fan of the group and reaching over 2,200 RPM, the Fryzen might also have to contend with higher decibel levels as well.

The single, high-speed fan of the Fryzen registered higher on our sound meter than the three 120mm fans of the Enermax Liqtech, providing us evidence for our aforementioned theory that the the Fryzen would make some noise. At full speed, the Fryzen is rather buzzy.

Coming as no surprise, the Fryzen does not fare well when we account for thermal load and noise levels, as both are areas where the cooler failed to keep up with our comparison group. Meanwhile, the large 140mm fan on the NH-U14S TR4-SP3 was able to keep our 2990WX nearly as cool as the Enermax Liqtech but at a much lower relative volume.

Swinging the pendulum back a bit in favor of the DeepCool Fryzen, a suggested retail price of $77 (£58) certainly helps when comparing to some higher-priced solutions like the Enermax Liqtech and NH-U14S TR4-SP3. While the DeepCool helps you keep a few extra dollars in your pocket, in our testing it failed to keep temps as low on a high-end, overclocked workstation as our competitors here.

Thermal imaging from our Flir ONE Pro camera shows some moderate heat soak with the cooler operating at 50 percent fan speed. But there's a bit more of a radiant heat ‘bloom’ with much more turbulent air at 100 percent fan duty cycle. Imaging at both 50 percent, and especially 100 percent, we still see a fair bit of thermal load amassing within the cooling tower itself, suggesting airflow might not be entirely optimal through the cooling fin stack.

In the high-end desktops (HEDT) marketplace, which includes the technological beasts in the Ryzen 2 line, 'budget' components aren't typically considered, since overall cost is often an afterthought. However, in terms of cooling, the DeepCool Gamer Storm Fryzen is a handsome option for budget-friendly PC builds centered on lower-core spec’d Threadripper CPUs, like the Zen Threadripper 1900X, Threadripper 1950X or Threadripper 1920X.