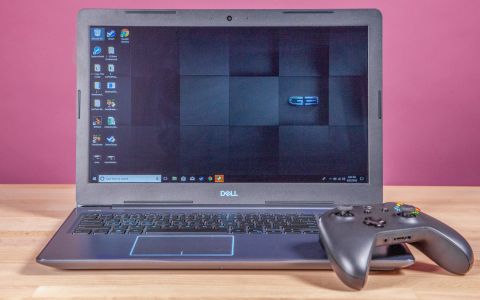 The Dell G3 15’s display leaves something to be desired, but strong performance makes it a respectable budget-level gaming machine.

The Dell G3 15 Gaming laptop enables gamers to play on a budget without suffering from delayed or stuttering graphics. And with a fantastic battery life and decent performance, its usefulness goes beyond PC games. Dell claims the laptop delivers carefree gaming at a budget price ($749.99 to start, $849.99 as tested); however, its weak display detracts from gaming and video experiences, making competitors like the Legion Y530 appealing.

I checked out the “recon blue” version of the G3, but it’s also available in black and alpine white. While it’s not ugly, the G3 is nothing special when it’s closed. The lid gets a touch of pizazz thanks to the Dell logo’s blue mirror finish, but other than that, it all looks pretty standard. I do appreciate the matte finish that makes the laptop feel secure, rather than slippery, in my hands.

When you open the laptop, you’re welcomed with a hint of sky blue, courtesy of the keyboard’s font and the Dell logo under the screen. This same shade of blue outlines the touchpad and A, S, D and W keys, and the deck features faint blue diagonal lines going from the upper right corner down toward the bottom left corner. The whole thing looks like a subtle party.

On the G3’s right side are the SD card slot, a USB 2.0 port and a security slot. Meanwhile, the left side houses the power jack, HDM1 2.0, an Ethernet jack, a pair of Type-A USB 3.1 ports and a headphone and microphone jack.

The G3 uses a Nvidia Geforce GTX 1050 Ti GPU with 4GB of GDDR5 video memory. That means you won’t be playing games at the highest settings, but the G3 stacks up well against other entry-level competitors.

While playing Middle-earth: Shadow of War on high settings at 1080p, the game ran between 35 and 67 frames per second (fps). The laptop’s dim display made it hard to see in the level’s darker areas and it was even more troublesome whilst summer sunshine flooded the room, further washing out the color. This all made me less effective as Talion, especially in shadows and bushes.

With a 2.3GHz Intel Core i5-8300H processor, 8GB RAM, 128GB PCIe SSD, a 1TB, 5,400-rpm HDD, our configuration of the G3 performed well on most tests, but I encountered some hiccups when doing some heavy multitasking. I opened 19 browser tabs without any problems, but by the time I got to tab 20, I noticed some lag when opening additional tabs. Some five tabs later, plus a YouTube video of “Zach Morris Is Trash” playing in the background I noticed the pointer delaying for a quick second every minute or so. However, these sorts of problems could be due to network bandwidth or maxing out the 8GB of RAM.

Images appeared lackluster on the G3’s 15.6-inch, 1920 x 1080 display. The trailer for Equalizer 2 came off as a dull blend of dark shades, and the fine lines of Denzel Washington’s worn expressions or thugs’ fearful faces were lost. Similarly, when I watched the trailer for Bumblebee, the titular Transformer’s yellow color was a bit muted and didn’t deliver the bright and exciting colors I expect from a Transformers movie. The viewing angles, however, are strong as I was able to view the display from a nearly perpendicular angle and experience only a small amount of glare.

When I played Middle-earth: Shadow of War, the G3’s monitor didn’t pay justice to the finer details of the rocky landscape or Talion’s ornate armor and cape. A very small amount of tearing creeped up occasionally as I navigated the world.

The G3 only covers 61.4 percent of the sRGB color gamut, a dismal deviation from the 106 percent category average. The FX504 and Y530 do better at 66 percent and 79.5 percent, respectively. However, the real color superstar is the 7REX, which covers 153 percent.

The G3 equips gamers with a chiclet-style keyboard with blue backlighting. A 1.2-millimeter travel distance makes for a rather shallow keyboard, and it requires a healthy 71 grams of force to actuate, producing a small click. I was able to meet my 100 words per minute average on 10fastfingers.com easily despite the lack of depth.

The touchpad is appropriately sized at 4.1 x 3.1 inches. Windows gestures work flawlessly, but there’s some off-putting movement when you use the touchpad. While responsive, it feels clunky with every touch and almost seems as if it’s not properly connected to the rest of the laptop’s deck. The issue is exacerbated when using the keyboard on your lap.

The G3’s speakers play crystal clear sound. When I listened to a-Ha’s “Take on Me,” each piano rift was distinct, and the lead singer’s echoing voice carried strongly. The speakers aren’t very loud, but what you do hear will be crisp, clean and sharp.

I used the preloaded Waves MaxxAudio Pro software to increase bass to the maximum, but that didn’t seem to change the audio quality, and maximizing all the options in the EQ profile barely had any noticeable impact. However, turning up details all the way did, in fact, lead to more full-bodied sound.

The G3 is relatively easy to upgrade. To get inside you’ll need a Phillips #1 screwdriver to remove eight screws (for some reason two screws were missing on our unit) and loosen two base screws. The Dell G7 offers easier upgradability since you only have to remove one screw to take off the base cover.

Once you’ve removed the G3’s base cover, you’ll have easy access to the hard drive, SSD and RAM. You can replace the hard drive by removing and replacing a few screws to free it from a bracket. On our review unit, with 8GB of RAM, there was a free DIMM slot to allow you to upgrade to 16GB memory.

The G3 runs on a 56-watt battery and lasted much longer than the competition in our tests. We used Wi-Fi to visit websites and stream video and webGL animations at 150 nits of brightness. The G3 lasted an impressive 6 hours and 37 minutes, over an hour longer than the average 5:17. This leaves the competition in the dust: the FX504 only lasted 3:57, the 7REX 3:33 and the Y530 4:44.

Using the G3’s 720p HD webcam yields decent pictures. It handles darker skin tones better than expected and even picked up the details of my floral print dress, all without leaving a trail when I moved around. The downside is you have to tilt the screen down towards the keyboard a little bit to get more accurate, lighter color.

The software Dell includes on the G3 includes Dropbox and trials of Microsoft Office 2016 (30 days) and McAfee Live Safe (one year). Additionally, the laptop comes with Dell Mobile Connect to connect a phone to your laptop, SupportAssist for tech support and SmartByte to prioritize what uses your bandwidth. The G3 also comes with common Windows software like Candy Crush Saga, Candy Crush Soda Saga and Bubble Witch 3 Saga.

Dell offers a one-year limited warranty for the machine.

The Dell G3 15 Gaming laptop doesn’t disappoint as an entry-level gaming laptop and even stands out with a decorative deck.

However, the display’s below-average brightness and bland colors take away from both gaming and watching videos. If you want a machine that can display your games and movies at its brightest and most colorful, pay $100 more for the 7REX ($949), which covers an impressive 153 percent of the color gamut, or the Y530 ($949.99), which offers superior brightness.

But for $849.99, the G3 brings decent performance for productivity and gaming and strong battery life.