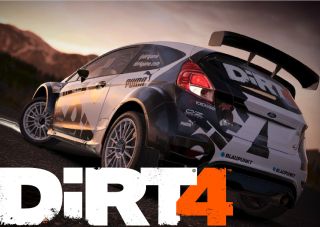 Codemasters recently released the 12th title in its Colin McRae Rally series, called DiRT 4. The game is based on the in-house EGO 4.0 engine, which was also used in F1 2015, F1 2016, and F1 2017. As we've seen from this franchise before, DiRT 4 serves up classic rallycross courses; the landrush mode with stages in California, Nevada, and Mexico; and joyride mode for multiple players.

While this is a multi-platform game (available on Windows, but also for the PlayStation 4 and Xbox One), DiRT 4 remains limited to DirectX 11 support.

The Steam page for DiRT 4 lists minimum and recommended system configurations suggested by the game publisher for acceptable performance. At a glance, it doesn't look like you'll need particularly modern hardware for an enjoyable experience. PCs from several years ago should prove adequate if you're willing to make some compromises on quality settings.

There are many graphics options to choose from (almost too many, in fact). Thankfully, five overarching presets help simplify the list in case you don't want to go option by option. Instead, you're able to choose from Ultra, High, Medium, Low, and Very Low. Additionally, you're able to pick different anti-aliasing techniques (CMAA, MSAA, or even EQAA for Radeons) and anisotropic filtering levels.

Of course, the Ultra quality is best. But the High preset doesn't sacrifice much detail in comparison. At most, there are certain reflections and transparencies that are less detailed, while distant shadows are simplified as you step down.

Textures suffer the most as you drop to Medium quality, particularly with respect to roads. Distant shadows and lighting are equally impacted; this is especially noticeable in the rendering of trees.

When quality is dialed down to Low, shadows and reflections are affected the most. Despite those compromises, though, the game's overall visual fidelity remains enjoyable and is not that different from Medium.

Conversely, the difference between Low and Very Low is night and day. Everything is simplified to the max: the gardener mowed the lawn, trees lose some of their branches, and the spectators are apparently at home. The loss of detail is too high at this point, so you'll only find yourself picking Very Low if you're using one of those graphics cards on the Minimum Hardware Requirements list.