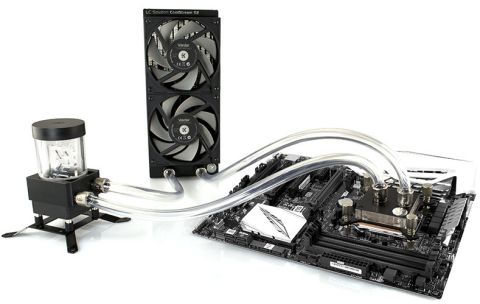 Our test bed for open loop cooling testing uses an i7-5960X with its two hottest cores disabled, effectively making it an i7-5930K. It’s overclocked to 4.2 GHz at a 1.2V Vcore. The fans and pump are connected directly to the motherboard's headers. The fans are mounted to the radiator in a push configuration. The radiator is left outside the open case test bed. Temperature is measured under Prime95 (v27.9, small FFTs, 12 threads). Temperatures are not measured until the loop heats up and reaches equilibrium.

The Predator uses the same CPU water block, a stronger pump, and has a larger radiator (it's thicker than the SE 240). Despite this, the Slim 240 still posts significantly lower CPU temperatures. How would this happen? The Predator ships with fans in a pull configuration, which was how it was tested. This would change how the air, and how much air, passes through the radiator.

An open loop like the Slim 240 lets the end user set fan and pump speeds independently, an important advantage over AIO coolers. The SPC 60 shows a notable jump between 50% and 75% speed, though you clearly hit the level of diminishing returns above that. However, even at full speed the Slim 240's pump doesn't draw more than 6W and is below the threshold of hearing from more than 1m away.

Again, the Predator ties the PWM of its fans and pump together and only returns the rotational rate of its fans, so we don't have tachometer readings for its pump. We clearly see the speed advantage of the F4-120ER Vardar over the F3-120 in the Slim 240, with both a higher ceiling and lower floor.

The fan difference is on display once again. The F3 Vardars in the Slim 240 don’t go as fast as the F4s, consequently they are slightly quieter than the Performance 360’s three fans. Dock a few decibels off when inside a case and you’d be hard pressed to even hear the Slim 240 at full speed. However, the Slim 240’s fans also can’t spin down as low as the others, meaning more noise even at slower speeds. Still, at 28.9 dBA, it’s already practically silent.

The Predator’s loud noise at full speed is due to the pump. DDC models are known to be shrill at full tilt, and once again the Predator’s pump is tied to the fan PWM signal. It’s also bolted directly to the radiator instead of having its own acoustic dampening mount. Drop the Predator to 50% and its pump noise drops away, resulting in quieter operation than even the Performance 360.

The Slim 240 is quieter than the Performance 360 at full speed, but it still doesn’t cool as well with the lower noise. The Premium kit takes an even bigger efficiency lead when operating at lower speeds. Both are superior in total performance to the Predator.

However, the Performance 360’s, um, performance comes with a big hit to the wallet. Costing almost twice that of the other options, it doesn’t deliver even close to twice the cooling as either the Slim 240 or Predator. These latter two are neck and neck in cooling value, but the Slim 240 has a huge advantage in acoustic value and customization.

Few people dive into liquid cooling to have fans running full speed. Comparing performance at 50% shows the Predator gaining a lot of ground in acoustic value even as the Slim 240 closes the small gap in cooling value.

All-included liquid cooling kits (let's coin the phrase LCK) are becoming more common, and it's a great thing for liquid cooling enthusiasts and neophytes alike. But if all you’re worried about is cooling for the money and nothing else, sealed AIO coolers (and especially air coolers) are still the better value. They're simply easier to produce, and that keeps the cost lower. However, an LCK has many benefits over an AIO that aren’t measurable on our charts.

First is the customization. You can install it however you want to best fit your system. Intake, exhaust, top, front, push, or pull, you can fit it to your case's design without worrying about tube length or pre-packaged fan orientation.

Second, LCKs are expandable and upgradeable, whereas AIOs usually aren't. A few AIOs like the Predator have quick-disconnect fittings, allowing you to add a GPU water block or two. However, you're limited to the options offered by the AIO manufacturer. Swapping out the water block, pump, or radiator is almost never an option. An LCK has none of those problems. The kit gives you good cooling right now and the option to slowly change things out as you go along. You don’t need to redo your entire cooling system every time you want an upgrade. Want to mix components from four different companies? Fine. Want to upgrade the pump and leave everything else the same? Done.

So how does the Slim 240 stack up on its own? At $200 it’s one of the cheapest options for getting a fully customizable liquid cooling loop. That gets you a premium SE 240 radiator and a very good Supremacy MX water block. That’s plenty of cooling capacity for even high-end CPUs on an overclock. Even the much pricier Performance 360 is only a few degrees cooler.

The one knock against the Slim 240 might be its overall expandability, namely from its pump and radiator. The SPC 60A isn’t a weak or deficient pump, it just doesn’t have the high-end performance that more expensive models do. Going to a larger triple radiator and even adding a single GPU water block shouldn’t be an issue. But adding multiple GPU water blocks would necessitate replacing the pump with something stronger. Of course, multiple GPUs and an overclocked CPU would also be too much heat for a lone 240mm radiator to dissipate.

Whether these limitations matter is arguable. The Slim 240 is not intended as a high-end loop. It isn’t marketed to people cooling twin GTX 1070s and Skylake-X. But for any computer up to the level of a quad-core CPU and single GPU, which covers the vast majority of gamers and enthusiasts, the Slim 240 offers plenty of headroom.  As shown in our performance charts, it can even handle an overclocked Intel HEDT CPU with aplomb. I can’t say this is a Recommended product since full liquid cooling is still overkill for most people. But it’s certainly an Approved product without serious fault. If you’re in the market for a high-end AIO cooler, especially one with expansion options, you should do yourself a favor and at least consider the Slim 240 first.