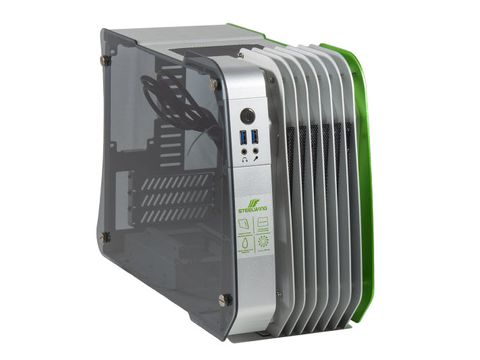 The Steelwing looks good, but Enermax needs to commit itself one way or the other and either ditch the Micro-ATX capability and move the power supply, or increase the size of the case to appropriately accommodate its internals.

Today’s review sample, the Enermax Steelwing, is a Micro-ATX, mini-tower case from a company that is primarily known for almost exclusively producing ATX mid-tower cases. With a height of only 11.81", the Steelwing happens to fall just short of the traditional definition of a mini-tower. The lack of a fourth expansion slot, internal drive bays, and SFX-only power supply mount further complicate things. Still, Enermax claims you can stuff the Steelwing with a Micro-ATX motherboard and gaming hardware and still keep everything cool. While we don’t have a Micro-ATX setup for testing compact cases, our standard testing setup will at least establish a bottom line of what the Steelwing can handle.

Depending on what flavor the reader chooses, the Enermax Steelwing comes in either a black/red or silver/green color scheme with a front LED case fan that matches the case's accent color.

Despite Enermax’s choice of name, the Steelwing features an all-aluminum construction, with a tinted tempered-glass window for a view. The front of the Steelwing features a set of decorative fins that cover the front air intake and break up the look of an otherwise flat front panel. These fins also hold a non-removable, coarse steel mesh, which provides minimal air filtration for the front air intake. Up top there’s also another air intake, sans fan mount, with the same steel mesh.

The Steelwing’s left side features an anodized aluminum panel secured by four thumbscrews. Unfortunately, even though the panel is easily removable, it seems it only serves a decorative purpose with no opportunities for cable management hiding behind it. An extra bit of width, even if only a half inch or so would add a bit of extra value to the case and would make cable management much easier.

The back of the case is host to a standard motherboard cutout as well as three expansion slots and a mount for an SFX form factor power supply. The location of the power supply mount and its proximity to the motherboard limits the Steelwing to a maximum supported CPU cooler height of only 80mm. Meanwhile the lack of an additional expansion slot limits users of Micro-ATX boards to only a single high-performance graphics card.

Inside the Steelwing we find a 120mm green LED fan mounted inside of a bracket. Readers who choose liquid cooling over air cooling may toss the fan and use the bracket to mount a 120mm radiator and fan in its place. Alternatively, if you feel like not having any fans in your case at all, Enermax also advertises the bracket as being able to hold a 3.5” hard drive, though the airflow lost by such change will probably offset any benefit gained by the extra storage.