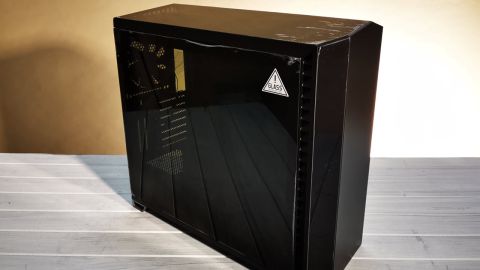 Now our AIO build is out of the way, it’s time to get down to the thermal temperature testing. For this we perform two rounds of tests.

The first set of benchmarks take advantage of an air tower (notably Noctua’s NH-U12A), equipped with 2x Corsair ML120 Pros. This allows us to keep the included case fans in their factory installed locations during testing, without running into compatibility issues, and is an ideal insight for those looking to just plug and play their kit into the case.

The second set of benchmarks utilize what we consider to be the most optimal installation setup when it comes to both the included chassis fans and a 240mm AIO liquid-cooler. The cooler again features those same two Corsair ML 120 Pros. This way we can showcase just what each chassis is capable of in a “best-case” scenario, without necessarily investing in additional fans, just purely by moving the ones provided around inside with the help of an AIO. Ambient temperature sits at 21 Celsius in our testing lab, and all fans are plugged directly onto the motherboard’s chassis fan headers, then left in the default BIOS profile.

From a quick glance at the results from our stock testing,  you can see this case is warm, even compared to the NZXT H710i. It tops out our test suite so far both on the CPU and the GPU. This is due to a combination of factors, the first being the lack of easy access for those fans to draw in air, secondly the fact that there’s only two front fans installed as standard, both of which are located at the top of the front panel. And finally, those fans are just so lackluster when it comes to static pressure performance that they’ll struggle to draw in cool air from those side vents.

In our “optimal” configuration, taking advantage of Corsair’s 240mm AIO instead as an exhaust, we see temperatures drop, although not by as much as we’d expect. There’s an overall decrease of 6 degrees Celsius across both the CPU and the GPU. The big difference for the GPU here is that we’ve taken the rear exhaust fan Fractal includes as standard and have instead installed it at the bottom of the chassis to draw in as much air as possible.

We’ve also swapped out the top tempered glass panel for the radiator bracket and the ventilated panel. There’s a 3 degrees Celsius drop in CPU temp compared to the stock configuration, however with more intake air through the inclusion of some beefier SP optimized fans, this would likely drop further.

The Vector RS is a chassis that leaves us with more questions than answers. From a system builder’s perspective, the case performs well. There’s vast support for a multitude of storage configurations and excellent liquid-cooling support. It’s nice to see all of this included straight out of the box. We do have some reservations about the internal cable management but, on the whole, it’s not enough of a problem to cause it to be an irritable build experience.

As far as air-cooling goes, in everyday scenarios even under load, the case performs adequately. Even with those stock fans, you’re not going to hit thermal throttling unless your ambient temperature is in the low 30s. And even then, only after prolonged exposure to heavy workloads.

Cooling is by far the Vector RS’s biggest weakness, which justified in part by Fractal’s admirable obsession with reducing noise. That said, as much as silence is golden, the biggest noise generator in any rig is going to be the graphics card and, if you can’t keep that as cool as the competition can, then all the noise dampening you throw into this thing is effectively going to be pointless.

And then there’s the price.  At $180 (£180) for the standard tempered glass version we have here, it’s currently $40 more than Fractal Design’s Define R6 ( which is based on the same interior chassis), which means that you’re paying $40 more for some angular external panels and RGB.