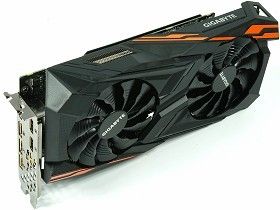 Gigabyte's Radeon RX Vega 56 Gaming OC 8G began life as an Aorus-branded stunner, but had to be pared back in the face of supply issues from AMD. What remains is still a very fast gaming board, albeit with a more budget-oriented cooler. Unfortunately, limited availability means there aren't many to go around.

A few weeks back, we published our Sapphire Radeon RX Vega 64 Nitro+ Review, introducing the first third-party Vega-based card to land in our labs. Compared to that board, Gigabyte's Radeon RX Vega 56 Gaming OC 8G is more understated, featuring easier-to-manage weight and dimensions. It's almost like this card was designed to be ordinary-looking, so as not to generate demand that Gigabyte wouldn't be able to satisfy. Nevertheless, this is a good example of a bread-and-butter solution that covers all of the bases and still offers a different approach than AMD's reference implementation.

According to our sources, AMD's board partners have only received a few thousand Vega 10 GPUs, and most of those are destined for RX Vega 64 cards. Thus, a general shortage of packages is preventing anyone from mass-producing notable quantities of either model. It's simply not possible to start and stop a production line over and over again. It costs too much time and money.

We were lucky to get our hands on a sample of Gigabyte's Radeon RX Vega 56 Gaming OC 8G, since we heard that fewer than 100 made their way into Germany. Buying a card of our own was the only way to get one into into the German lab. Here in the U.S., this is a mythical creature. Nobody has it for sale, and the only references online come from Gigabyte's site or product announcement news stories.

Weighing just over 1kg, Gigabyte's card is an astonishing 600 grams lighter than Sapphire's Radeon RX Vega 64 Nitro+. This implementation is also considerably more compact, yielding a length of just 27.8cm, a height measurement of 13cm, and 4.7cm of width.

Two counter-rotating fans, each with a diameter of 9.5cm, are positioned inside 10cm openings. According to Gigabyte, its unique fan blade design splits airflow and guides it through curves on the fan surface, improving flow compared to traditional fans. Naturally, we'll test the efficacy of those claims shortly.

The backplate doesn't feature an Aorus logo, which was present on a pre-production model we briefly had our hands on. A copper insert placed on the back of the package is thermally isolated from this plate. Both components do play a role in cooling, though. Not pictured is a heat pipe that snakes around under the backplate, though we'll cover that in more depth, too.

Plan for an extra 5mm of clearance (at least) behind the Radeon RX Vega 56 Gaming OC 8G. This may cause problems on some motherboards, particularly if the heat sink/back plate intrude on an occupied expansion slot or large CPU cooler.

A peek in from the bottom shows that Gigabyte optimized the shape of its vertically-oriented fins. The slight tilt and wave shape are meant to create more efficient airflow, and thus improve cooling.

Up top, it's apparent that Gigabyte paid close attention to cost. There are no RGB lighting effects or other gimmicks. Instead, you get simple injection-molded plastic and printed orange-colored highlights. The white Gigabyte logo is simply printed on. And similar to AMD's reference design, Gigabyte only requires a pair of eight-pin auxiliary power connectors.

The closed back side doesn't reveal much. We catch a mere glimpse of two 8mm and three 6mm heat pipes, along with the fans' cable. On the board itself, we see solder pads for additional components (RGB output, perhaps?) that were obviously abandoned at some point during development.

The I/O bracket is interesting because it features six connectors, rather than the reference design's five. Three HDMI 2.0 ports and three DisplayPort 1.4 outputs are available simultaneously, allowing you to connect six monitors in an Eyefinity array.

In comparison to the relevant reference cards, the specs read as follows (the GeForce GTX 1070 is deliberately not used for comparison, since in many cases it's dramatically outperformed by an overclocked Radeon RX Vega 56):

Next Page Board & Power Supply