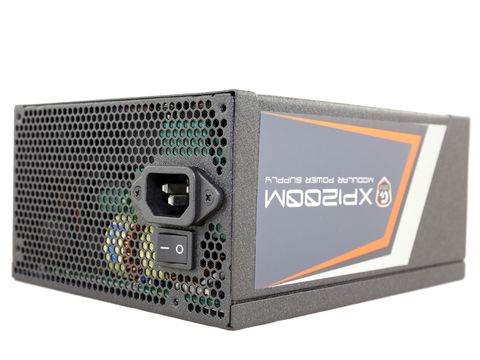 Using the results from the previous page, we plotted a chart showing the XP1200M's efficiency at low loads, and loads from 10 to 110 percent of its maximum-rated capacity.

Compared to other similar-capacity Platinum-rated power supplies, the XP1200M's efficiency looks low, especially under light loads. Enhance should at least figure out how to improve its platform's efficiency at those levels.

In the following tests, we measure the XP1200M's efficiency at loads significantly lower than 10 percent of its maximum capacity (the lowest load the 80 PLUS standard measures). The loads we dialed were 20, 40, 60, and 80 W. This is important for representing when a PC is idle, with power-saving features turned on.

Under 20 W of load, the PSU registers very low efficiency. Unfortunately, that's also true in the other three tests, as efficiency fails to exceed the 80% mark even with 80 W load. To make things worse, the fan spins fast despite the low load levels, making lots of noise. Although the ambient temperature is above 39 °C during these tests, that shouldn't be a problem given how little load we're applying.

The 5VSB rail registers high efficiency. This is a nice surprise, given the unit's average performance so far.

The next chart shows the cooling fan's speed (again, in RPM) and output noise. We measured acoustics from one meter away, inside a small, custom-made anechoic chamber with internals completely covered in sound-proofing material (be quiet! Noise Absorber kit). Background noise inside the chamber was below 18 dB(A) during testing, and the results were obtained with the PSU operating at 39 °C (102.2 °F) to 49 °C (120.2 °F) ambient temperature.

Under normal ambient temperatures, the PSU's fan is audible up to 500 W load, and at higher than 650 W the noise exceeds 40 dB(A). That's an annoying amount of noise to sensitive users. With greater than 1 kW loads, the fan's noise exceeds 49 dB(A), annoying most folks.

Prev Page Load Regulation, Hold-Up Time, And Inrush Current Next Page Protection Features
5 Comments Comment from the forums
Be In the Know