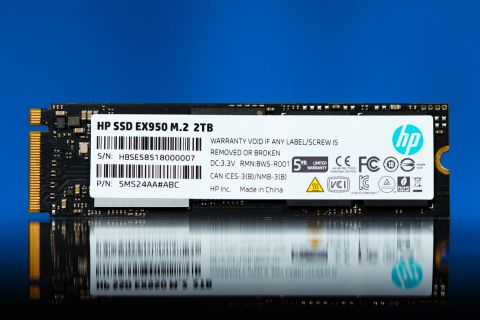 The 1TB HP EX950 ranks fourth overall, just a few points and a few MB/s behind the ADATA SX8200 Pro. With an average bandwidth of 760 MB/s, its performance is quite impressive. The 2TB model, however, was slightly slower at 706 MB/s. Compared to the 2TB Samsung 970 EVO, though, performance is quite better.

As an SSD marketed to gamers, especially those in eSports, we’re expecting nothing but the best. And we get just that. Well, almost. The HP EX950 comes in second place, just behind the Optane Intel 905P, with a total load time of 19.75s. Again, the 2TB model exhibits slightly slower performance.

Unlike the previous two tests, the EX950 2TB actually surpasses the performance of the 1TB model. With an average of 340 MB/s from the 1TB model and 365 MB/s from the 2TB model, these drives don’t attain top positions. But overall, they are still very fast.

Read performance could use some improvement, though. While the read speeds of 2,123 MB/s and 1,845 MB/s are respectable in their own right, the EX950 lags slightly behind the Samsung drives, WD Black SN750, and E12-powered MyDigitalSSD BPX Pro.

The drives install the benchmark within seconds of the other comparable drives, which is good to see: That's almost as fast as the Intel 905P. The full benchmark results are impressive, too. The 1TB model ranks third and proves to be quite snappy with performance that is just slightly better than the Samsung 970 Pro. The 2TB model ranks sixth overall and offers better performance than the 2TB Samsung 970 EVO.

The HP EX950 shows similar sequential performance with both capacities over the full span of file sizes with a maximum of 3.4GB/s read and 3GB/s write. However, the 2TB model falls behind the 1TB model by about 30-50 MB/s during both reads and writes.

While HP’s SSD EX950s performed great in our application tests, they fell behind a bit in the synthetic workloads. Anvil’s shows them ranking 8th and 9th place overall due to lower-than-average write scores. But the 1TB model ranks third overall in read performance.

Sequential performance comes in at rated speeds at QD32, although once again the 1TB model exhibits better overall performance. The EX950 scores about 3.5Gb/s read in both capacities, but the 1TB model’s write performance is almost 150 MB/s faster than on the 2TB model.

At QD1, both drives read at ~2,145 MB/s and write at 2GB/s, or just over. Random QD 1 performance is extremely good, surpassing every other drive in the comparison pool except the Intel 905P at 1TB. Scaling up to QD64 shows that the drives are indeed capable of over 400,000 IOPS of random read performance. They also surpass their write performance rating significantly.

As with most new SSDs, the HP SSD EX950 has an SLC write cache. After writing 170GB of data, the 1TB model slowed to an average of 721 MB/s over the remainder of the test. The 2TB model was able to absorb quite a bit more data–nearly double the amount, in fact.

After writing 317GB of data, the 2TB EX950 slowed down to an average of 1,180 MB/s. Unlike other drives in our comparison pool, the HP drives serve up very inconsistent performance.

HP’s EX950 is a fairly efficient SSD. With an average of 112 MB/s-per-watt, the 1TB model proves to be a bit less efficient than its larger 2TB brother (127 MB/s-per-watt). The 1TB model consumed more power on average and exhibited a higher peak reading during the 50GB copy test.

At idle, however, the drives are pretty evenly matched. With ASPM disabled they consume a bit over 0.7W. That falls to a minuscule 12mW with ASPM enabled.