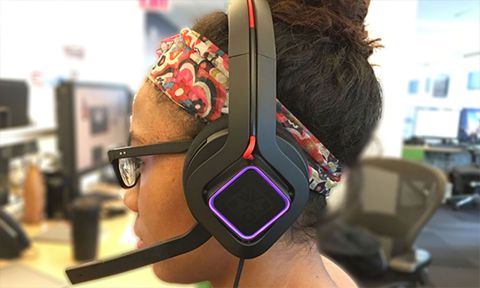 The HP Omen Mindframe gaming headset stands out with tech that keeps your ears cool and has great sound, but its microphone is unwieldy and there is occasional sound leakage.

When it comes to longer gaming sessions, uncomfortable, toasty ears are something that comes along with the territory. Many headsets claim to remedy this frustrating malady, but just use valves to let air in, rather than providing active cooling.  Enter the Hp Omen Mindframe, which uses thermoelectric magnets to chill its ear cups,  This $199 gaming headset isn’t the height of style, but it’s an excellent that delivers real comfort.

The Mindframe features a lot of angles, including the square with rounded corners that serves as the design on both exterior earcups. There's an LED light surrounding both squares, powered by the device's USB plug (this is the only way it can be hooked up). The headset's plastic frame is sturdy and  accompanied by an adjustable band that sits comfortably on the top of the head.

The mic itself is a bit unwieldy, as it's simply a folding, solid rectangle that can be flipped up or down but not extended or repositioned. It's an interesting, minimalistic design, but it could benefit from additional customization by way of an extendable portion or some sort of flexible material to help snake it around and closer to your mouth. While the mic is on the left side of the headset, there’s a volume knob on the right side.

The headset's angular, plastic-laden design isn't as comfortable as many competitors in the same price range, but it gets the job done. The cloth-covered earcups don't offer as much pliability as the plush leatherette of other models.

The fabric earcups bring car seats to mind rather than high-end headsets, but the material is breathable, which helps with the cooling. The Mindframe uses thermoelectric magnets to transfer heat from the inside of the cups to the outside, expelling warm air. The gimmick works; when you push the cups closer to your head, they feel like a breathe of fresh air.

The patented Frostcap cooling technology is something we'll likely see more of in the future, considering it does actively work to keep your ears' temperature down in a noticeable way, and compared to the valves on products like the Victrix Pro AF ANC that must be activated manually via switches to allow cool air in from the outside, it delivers.

The outside of the earcups start feeling warm to the touch after prolonged gaming sessions, which I experienced after a few rounds of Overwatch for testing, but the inside stays relatively mild, as though you've switched on the air conditioning in a steamy room. The cooling effect makes no noise, so you notice nothing but the heat being directed up and out of the acoustic chamber to make your experience a much more comfortable one.

When I played Overwatch, the headset's unique noise cancellation method, referred to as "sidelining," was most noticeable. While I needed to communicate for many of the test matches, there were more than a few times I was thankful that flipping up the microphone automatically muted it , a feature more headsets should implement.

Further, the headset's appropriately vivid soundscapes delivered fast and furious bass with plenty of crisp treble. During Overwatch, calls for healing and support came through as clear as day, while bullets zipping past my head were audible in the 3D space around me. It was far simpler to ascertain the position of my teammates in dire need of Zenyatta’s healing orbs than usual, so I was able to score a few more Play of the Games.

The headset's lush virtual 7.1 surround sound support was a true enhancement in Call of Duty: WWII. Faraway shells and the sound of shotguns blowing enemies away penetrated my eardrums with a ferocity I don't often hear, making it much simpler for me to judge where the assaults were coming from and dodge them appropriately.

I also put the Mindframe through its paces with Hellblade: Senua's Sacrifice. It was made with noise-cancelling headphones in mind and its use of binaural audio offered immediate payoff upon starting the game. The multiple voices whispering in heroine Senua's head from the beginning moments of her journey came through with startling clarity. The immersion factor was nearly overwhelming, and I wished I had played the entire game with this headset in the first place.

The Mindframe's range was pleasant and noticeable across a range of tracks, be it Die Antwoord's bassy Donker Mag or the poppy stylings of Lady Gaga's Born This Way. It was appropriately loud, with those around me hearing every single note of the tracks I ran through Spotify. That typically isn't an issue with most of the other headsets I use (and my go-to pair of SMS Audio Star Wars headphones). This isn’t a dealbreaker, but could become an issue if you plan on using this headset to cut down on noise around you or during quieter times in your home.

The isolation and thumping beats of my chosen songs were enough to make me reconsider my everyday pair to swap them out for the Mindframe instead, especially with its cooling effect, which is also useful when listening to music for an extended period of time. Whether I selected relentless house and disco beats or hip hop, listening to my go-to tracks was a treat with HP’s newest release.

Using the Mindframe requires you to install the HP Omen Command Center software (available only from the Windows Store), where you can adjust the cooling settings as well as the RGB lighting controls if you're not so keen on the default red for the headset exterior.

The software is simple to use, but if you’re not interested in further customizing your headset’s RGB lighting or adjusting the level of cooling, you won’t spend much time with the  application.

The HP Omen Mindframe is an interesting specimen. Its cooling technology, which works as advertised, adds to a solid laundry list of features. It’s an excellent choice for gaming as well as casual music streaming, with a svelte design, customizable RGB lighting and a companion app that offers plenty of options for hardcore headset fanatics. It’s a product that will no doubt influence future headsets that attempt to solve the problem of sweaty ears.