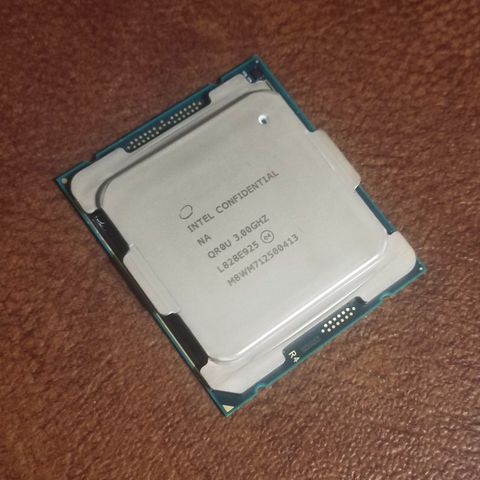 Intel's Core i9-9980XE offers flagship-class performance to a wide range of workloads thanks to 18 cores and aggressive Turbo Boost frequencies. You'll pay dearly for the privilege of owning one, though. Expect to budget extra for a high-end motherboard, a capable water cooling loop, and an enthusiast-oriented power supply if you plan on overclocking.

The battle for high-end desktop supremacy escalated last year when AMD released its first-gen 16-core Threadripper processors, challenging Intel's dominance in that space for the first time in recent history. Intel was forced to hastily launch its Skylake-X family with as many as 18 cores per CPU socket in order to remain king of the hill. AMD struck back earlier in 2018 with second-gen Threadripper processors, including the 32-core Ryzen Threadripper 2990WX. Although a sophisticated topology imposes performance compromises in certain applications, the new Threadrippers dominate heavily threaded tasks.

Not one to back down from a fight, Intel is responding with a refreshed Skylake-X series that tops out with the 18C/36T Core i9-9980XE. There's also an overclockable 28-core Xeon W-3175X waiting in the wings. But that chip's pedigree is decidedly more professional in nature.

That means Intel is dependent on yet another 14nm refresh to fend off AMD's advances. And this time, it won't be reclaiming the core count crown. As such, Core i9-9980XE features the same underlying Skylake-X architecture as previous-gen models. At least this time the company uses a solder-based thermal interface material (STIM) to improve thermal transfer between its die and heat spreader, yielding higher Turbo Boost clock rates. Overclocking might benefit as well. But even at stock clock speeds, expect to invest in a premium motherboard, high-capacity power supply, and beefy cooler to get the most out of Core i9-9980XE.

The competition between AMD and Intel isn't just about core counts or benchmark performance, though. Threadripper CPUs are still cheaper per core, and Intel refuses to budge on its lofty prices. As a result, Core i9-9980XE remains difficult to recommend in the face of AMD's newest Threadripper CPUs.

The Core X-series processors are designed for creators and performance aficionados who want workstation-class performance, the freedom to overclock, and other enthusiast-oriented features. They drop into existing X299 platforms, though you'll want to flash the latest firmware in order to properly support Core i9-9980XE.

As mentioned, the Core i9-9980XE sports 18 physical cores with Hyper-Threading technology, allowing it to operate on 36 threads at the same time. A $1,979 price tag means that the new Core i9 competes with AMD's 32C/64T Ryzen Threadripper 2990WX, even though its core count is more similar to the AMD Threadripper 2950X.

Core i9-9980XE comes with 24.75MB of L3 cache, just like its predecessor. New to this generation, though, is solder-based thermal interface material between Intel's 14nm++ die and heat spreader. The company used the same approach on its Coffee Lake processors to free up headroom for more cores. This time around, the extra headroom goes to enabling higher Turbo Boost frequencies.

Intel made a slight improvement to its dual-core Turbo Boost 3.0 frequency, bumping it up a mere 100 MHz to 4.5 GHz when the feature can target two "favored" cores with a lightly-threaded workload. Windows 10 now supports this feature natively. Intel also offers a 4.4 GHz Turbo Boost 2.0 bin. The real improvements are apparent in Intel's multi-core Turbo Boost clock rates, which increase between 200 to 400 MHz depending on the number of active cores. Expect modest gains, then, in lightly-threaded tasks like games and productivity apps, along with larger speed-ups in content creation and rendering workloads.

Also similar to Intel's previous high-end desktop CPUs, Core i9-9980XE utilizes a mesh architecture rather than the ring bus. According to company representatives, the mesh design is more scalable for connecting cores, caches, and I/O. For more detail, check out Intel Introduces New Mesh Architecture For Xeon And Skylake-X Processors.

Intel's Xeon processors are based on one of three dies: XCC (up to 28 cores), HCC (up to 18 cores), or LCC (up to 10 cores). Recently, the company was using its HCC die for Core X-series CPUs with more than 10 cores and the LCC die for models with 10 or fewer cores. That allowed Intel to maintain healthy margins (smaller dies are cheaper to manufacture) while minimizing unnecessary power consumption and heat. Now, though, it looks like Intel uses the HCC die for all of its Core X-series models. The newest chips jump to 165W from the previous generation's 140W rating. They also have more cache. As an example, the LCC die offers up to 13.75MB of L3 cache, and yet the Core i9-9820X and Core i9-9800X have 16.5MB on-chip.

In a surprising first, Intel leaves 44 lanes of PCIe 3.0 active on all of its Core X-series models. Previously, it trimmed connectivity as it worked its way down the stack. Clearly, this is a reaction to AMD's Ryzen Threadripper CPUs, which include 60 lanes of PCIe, regardless of the model you choose.

Next Page Power, Overclocking and Test Setup
20 Comments Comment from the forums
Be In the Know