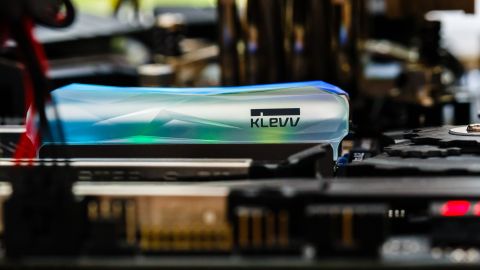 If you're are looking to add in some etra RGB to your build and want blazing-fast NVMe SSD performance, Klevv’s CRAS C700 RGB is worth a look. With a sleek finish and RGB lighting, this M.2 SSD will both brighten up and speed up your PC.

No, it won’t add to your in-game fps or speed up app responsiveness just because it glows. And, who would have thought years ago that even your SSD would shine bright like a rainbow in the night? RGB products are everywhere in the PC world these days. Manufacturers develop RGB SSDs to add some speed and bling to your build. But, while most are faster than your standard HDD, more often than not these RGB SSDs have been rather pricey for the level of performance they offer. That’s the infamous "RGB tax" you'll have to pay to experience a light show coming straight from your from your boot drive.

Klevv is one of a few companies that sells RGB SSDs (Team Group is another), but the company's products are only available in Asia and Europe, including the CRAS C700 RGB SSD that we're looking at here. This little guy isn’t so little with the bulky heatsink/lighting module that the company threw on, though. Aiming for a gem-like finish, the CRAS C700 RGB’s unique heatsink design keeps the SSD cool, no matter the workload. And the RGB lighting is fully compatible with ASUS, MSI, GIGABYTE, ASRock and Razer’s RGB software. So you should be able to sync the show with whatever other RGB components there are in your rig.

Compared to most SSDs these days, the CRAS C700 RGB has a bit more over-provisioning for sustained performance, but it comes at the cost of end-user space. The CRAS C700 RGB is available in capacities of 240GB, 480GB, and 960GB.

The CRAS C700 RGB comes with an endurance rating of up to 400TB at the 960GB capacity, and it halves as capacity halves. As well, it comes backed by a 5-year warranty.  Pricing is about $60 for the 240GB model and $85 USD for the 500GB model, based on Amazon Japan’s pricing.

The drive supports standard features like S.M.A.R.T. reporting, TRIM, and the ability to be securely erased.

Furthermore, the controller features a hardware LDPC ECC Engine and NANDXtend ECC technology, along with end-to-end data path protection, to enable competitive endurance and data reliability over time. An intelligent SLC caching algorithm helps aid high endurance and performance under consumer workloads, as is common among NVMe drives these days.

Klevv throws in Acronis True Image HD 2018 as a value add. This software allows you to perform full disk-imaging, backup, and universal restore. Hence, end-users will be able to transfer data from existing drives seamlessly.

There is no software included from the manufacturer to control the SSD’s RGB lighting effects. But as we mentioned earlier, the RGB control is fully compatible with ASUS, MSI, GIGABYTE, ASRock and Razer’s RGB software.

Klevv’s CRAS C700 RGB M.2 NVMe SSD is an M.2 2280 form factor SSD, but with its large heatsink, it comes in at 24mm thick and because of that, weighs in at 45 grams. Klevv claims the heatsink reduces the SSD’s core temps by 27%, so it should do well to keep cool even in systems with little airflow. Overall, we dig the gem-like aesthetics. The look and shape of the light diffuser helps to evenly illuminate the eight RGB LEDs in whatever color pattern you like. And even though it has a heatsink hiding most of it, the PCB is also black. This is a nice touch and the kind of attention to detail we like to see.

Next Page Performance Results
9 Comments Comment from the forums