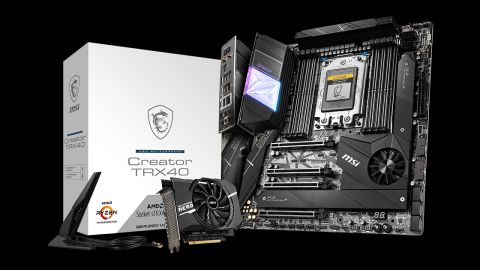 We enable XMP (or the motherboard manufacturer’s equivalent) when testing AMD products, so we shouldn’t be surprised to see the high quad-channel data rate coming from our four single-rank DDR4-3600 DIMMs. MSI, Asus and ASRock perform better at DDR4-3600 than they did in our memory overclocking test.

The Creator TRX40 started behind in our first 3DMark test but surged ahead in the second. More importantly, it finished with top marks in PCMark’s startup test. It also won in PCMark’s Excel and Edge tests, but appeared fairly average in others.

MSI’s Creator TRX40 takes third place overall in Ashes, but moves up to second in F1 2017. None of the differences are great enough to be noticed in game play.

The two priciest boards in today’s charts also have the greatest power consumption at full load, though the Creator TRX40 offsets its average with lower idle energy. Anyone who thinks that the 10GbE of the top two boards might be responsible for that high power needs to consider that the TRX40 Creator also has this controller (though it also has a smaller CPU voltage regulator).

The Creator TRX40 ties for first place performance with the TRX40 Aorus Master, and even though these victories are narrow, they contribute to slightly greater efficiency scores. That’s where MSI scores its greatest victory.

MSI’s Creator TRX40 is the second-most-expensive sTRX4 motherboard we’ve tested, and it has most of the onboard features of the highest-priced ROG Zenith II Extreme. Most noticeable of the Zenith II Extreme’s extra features are its onboard OLED display and its fan controller card.

The problem for MSI is that when we compared the Zenith II Extreme to other boards, it just seems expensive for its feature set. People who are willing to pay about $150 extra for the ROG motherboard’s exclusivity might not care about that, since no other board has its exact feature set, but it puts the Creator TRX40 in a difficult position. Perhaps we should instead consider what it gives you over the cheaper boards?

The Creator TRX40 has around twice as many voltage regulator components (and over 50% more ampacity) than ASRock’s TRX40 Creator, and that should make it a better match for AMD’s new 64-core 3990X processor.  But both the TRX40 Aorus Master and TRX40 Taichi also have big voltage regulators, and both of those boards cost $200 less.

Of the two $500 boards, only the Taichi includes a 4x M.2 adapter card for one of its PCIe slots. MSI’s card looks better of course, with its GPU-style double-slot cooler, but it’s intended to consume one of the board’s two PCIe x16 slots. The Taichi has a third x16 slot that’s perfectly suitable for its card, but that slot only exists because ASRock chose three x16 slots in its design, compared to MSI’s x16/x8/x16/x8 four-slot configuration. So, MSI’s design better serves third-party PCIe x8 storage cards than does ASRock’s. And the Taichi’s 2.5GbE loses out to the MSI Creator TRX40’s 10GbE.

We would have appreciated the ability to chose ourselves whether to use the included four-drive adapter as a two-drive adapter in one of the board’s other slots, but MSI’s double-slot cooling design took that choice from us.