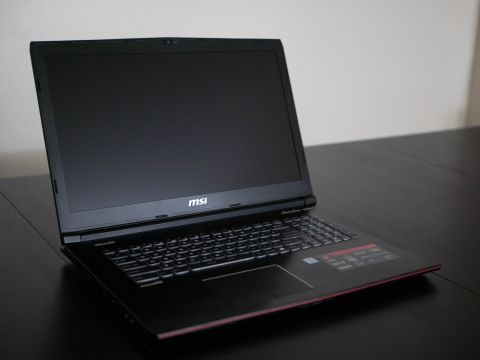 The MSI GE72VR Apache Pro-010 weighs in at a good price, but it has a rather uninspiring chassis and user experience, and is particularly hindered in high-end gaming by its lack of memory.

We’ve recently tested a variety of gaming laptops with varying performance levels and configurations, ranging from an enthusiast-level monster with an Nvidia GeForce GTX 1080 to a budget-oriented laptop with a GTX 1060 and only 8GB of memory, and everything in between. Today, we’re looking at the MSI GE72VR Apache Pro-010, which has a pretty standard configuration consisting of an Intel Core i7-6700HQ and a GTX 1060, but only 12GB of system memory.

We’ve seen quite a few MSI laptops as of late, so we’re already pretty familiar with the company’s black brushed-metal finishes. The GE72VR Apache Pro is no exception, sporting the traditional finish along with a Gaming Series shield logo and a mirror-finished MSI logo near the top. As always, the shield logo is illuminated with white LEDs when the system is powered. There are a few angled accents that decorate the otherwise plain exterior surface.

The same brushed-metal finish can be found inside as well, and just like the top, the interior surface remains unadorned. While the laptop's surface feels premium, it suffers from the same fingerprint and smudge magnetism that we found on most of MSI’s previous entries. No matter how satisfying it may feel, brushed metal isn’t always ideal for a product users will handle daily.

At the back, we finally get to see a bit of the Apache Pro’s wild side; heat is expelled from the cooling solution’s aluminum heat fins via the two large, aggressively-designed exhaust vents. The vents give off that super-car vibe that we see in the MSI GT73VR Titan Pro’s and the Asus G752VS OC Edition’s rear exhaust vents, but the Apache Pro’s vents aren’t as rambunctious. Thin red accenting adorns the back edges, and “Apache” is stamped in white text.

Unlike the smooth, refined finish found above, the bottom panel is constructed out of black plastic. There are six ventilation cutouts located on the bottom; the two small vents on the sides are for air intake while the four larger vents dispel air from the heat pipes and other internal components. There are four large rubber feet at the corners and five small plastic feet in the middle for stability. On the left is a grille for the Apache Pro’s subwoofer. The MSI Apache Pro’s overall build quality feels lackluster, and both the top metal surface and bottom plastic panel is susceptible to flexing.

The MSI Apache Pro’s hinge has an impressive range of nearly 180°, which is unheard of on a laptop unless it’s a thin-and-light construction, and even more unheard of on a gaming laptop. Just behind the hinge are subtle red accents which decorate the otherwise plain chassis.

The Apache Pro’s speaker grilles are located on the front lip facing forward. As we’ve pointed out numerous times, this isn’t ideal placement for laptop speakers; the sound is muffled, and while typing or gaming, your arms are naturally placed in a position that rests directly above where the speakers are pointing, muffling the audio even more.

On the left, you’ll find a Kensington Lock, a Gigabit Ethernet port, two USB 3.0 ports, an HDMI 1.4 port, a Mini DisplayPort 1.2, a USB 3.1 Type-C port, a microphone-in jack, and a headphone-out jack. On the right side, you’ll find the optical drive, a USB 2.0 port, and an SD Card reader.

The MSI Apache Pro features a 17.3” Full HD display with an IPS panel, making viewing from wide angles comfortable. The display outputs at 60Hz. Additional displays may be connected via the HDMI 1.4 port and the Mini DisplayPort.

The Apache Pro features a scissor-switch keyboard with RGB backlighting, complements of SteelSeries. The keys are spaced perfectly, which makes typing on the SteelSeries keyboard extremely comfortable.

The touchpad is a different story. Typical touchpads come in many different textures ranging from matte to glossy, but these surfaces are almost always smooth. The Apache Pro, on the other hand, features a brushed surface that looks similar to its metal finish, but has a rather rough, almost wood-like texture. The texture is awkward to get used to, but tracking with the touchpad is surprisingly accurate. The left and right buttons below the touchpad also feature a satisfying tactile click.

The MSI Apache Pro's bottom panel is secured to the chassis with a 19 screws, one of which secures the optical drive to the system as well. Removing the panel reveals the Apache Pro's cooling solution, which consists of two fans on the left and right, two copper heat pipes for the CPU, and four heat pipes for the GPU. The GPU has a large heat sink, and one of its heat pipes leads to the left fan. Above the cooling solution you'll find the two memory slots, the M.2 SSD slot, and the 2.5" drive slot. Above the right cooling fan is the Apache Pro's subwoofer, and beneath the cooler sits the 6-cell 51Wh battery.

As with all of MSI’s gaming laptops, the GE72VR Stealth Pro ships with Dragon Center pre-installed. From here, users can track system metrics, toggle power, battery, and fan profiles, or edit their SteelSeries keyboard’s RGB lighting. We’ve covered Dragon Center in both the GT73VR Titan Pro-201 and GS63VR Stealth Pro-034 reviews, so be sure to check those out!