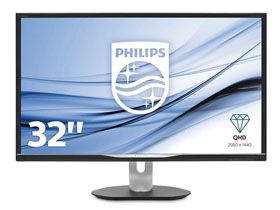 Jumbo monitors are a bit under-represented in our database, but we reached back and found the Dell UP3017 and NEC PA320W, 30" 16:10 screens with 2560x1600 resolution. We're also including BenQ’s PV3200PT, an Ultra HD model. In the 27" category we have the BenQ PD2700Q and Nixeus’ PRO Vue 27P. All the screens are high-end business class or professional in nature.

Philips’ website lists the BDM3270’s max output at 250cd/m2, but we got over 300cd/m2 from our sample. Many large screens can’t reach the 350cd/m2 level, but this one comes close. It’s more than enough brightness for any task that takes place indoors. If you need something for a location photo shoot outdoors, the NEC might a better choice.

VA is all about black levels, and Philips seems to have the market cornered with this monitor. In anything other than total darkness, you can’t even tell the screen is turned on. This is why its contrast is over 5700:1. You won’t find that kind of performance from most televisions let alone computer monitors. The resulting image depth is quite stunning.

Setting the brightness slider to zero offers up an almost-perfect 48.4680cd/m2 with black levels that could be mistaken for a plasma TV. Gaming in a room with the lights out is an almost magical experience. Blacks are truly black, and there is plenty of detail even in the deepest shadows. And contrast is still over 5000:1. It’s not quite as consistent as what we see from other panels, but the difference from top to bottom works out to about 11%, a barely visible change.

One of the BDM3270’s SmartImage modes is called SmartUniformity, and it compensates for screen uniformity issues by manipulating brightness in specific zones. We aren’t fans of this feature in most monitors because it reduces output and contrast. In Philips’ case, output is lower by 24%, but contrast is almost exactly the same. This demonstrates careful engineering and attention to detail. Our sample didn’t need help in the uniformity department, but it’s nice to know the feature is well-implemented here.

Calibration reduces contrast by 22% which would be a bummer on any other display. But since the BDM has such great out-of-box accuracy, we recommend leaving the RGB sliders alone and simply using the monitor in its default state. You’ll see on the next page that adjustment provides no benefit to grayscale, gamma, or color quality.

Although SmartUniformity doesn’t affect sequential contrast, it does reduce the ANSI result by 22%, which is another reason to avoid it. The good part is that after calibration, intra-image contrast is actually higher, which is something we almost never see. The BDM3270 is using an exceptional panel part, and among computer monitors of all classes and price points, it has no equal in the contrast department.

Prev Page OSD Setup & Calibration Next Page Grayscale, Gamma & Color
26 Comments Comment from the forums
Be In the Know