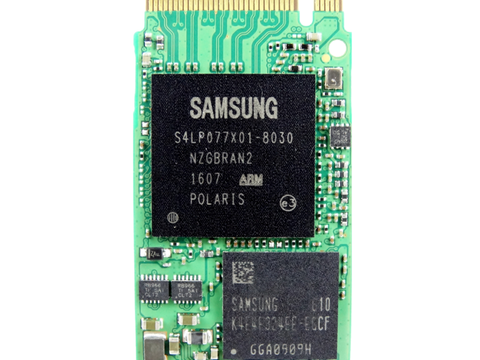 NVMe has come a long way since its debut. On the enterprise side, the technology has spurred new companies to enter the SSD market. In time, we may see those designs trickle down to the consumer market. We've had a lot of growth on the consumer side, as well. There are enough drives for us to build full charts with every product at specific capacity points. The growth is explosive, and it isn't just the number of products.

Performance has also increased since we first tested the Intel SSD 750 Series. In the charts, you will see how small (and soon to be low-cost) products have become more powerful than the enterprise-derived 750 Series.

In the test pool, we have the Samsung PM961 that we already introduced, the retail Samsung 950 Pro 512GB and the stellar (but OEM-focused) SM961, which should be the precursor to the rumored Samsung 960 Pro. We also have the performance-focused Intel 750 Series 400GB and the new low-cost Intel 600p 512GB (review soon). The OCZ RD400 is the retail version of the OEM XG3, and both deliver very good performance but still reside on the upper end of the NVMe price scale.

The Patriot Hellfire M.2 and Zotac Sonix, in the add-in card form factor, round out the comparison drives. Both use Phison's innovative 8-channel PS5007-E7 controller, which continues to evolve with firmware updates. Patriot will have a performance-increasing firmware release in the coming month if everything goes as planned. Unfortunately, Zotac has yet to release a firmware update for the Sonix, even though we know an update is available from Phison to increase performance.

In the last week, we've seen and heard about many exciting products in the pipeline that will expand the reach of NVMe. The new rush of products is just the first wave in a fluid environment that promises rapid changes for years to come.

Before we dive into testing, I would like to add a performance preamble, much like we did with the Samsung SM961. Both the SM961 and PM961 are OEM products and use the standard in-box Windows NVMe driver, but there is not a proper Samsung-optimized NVMe driver for either SSD. Samsung's previous NVMe-based SSDs experience a decent performance increase from their custom drivers. Also, OEM builders want performance but place more emphasis on stability, compatibility and power consumption, among other focus areas. We expect both the SM961 and PM961 to have slightly higher performance in retail form. We don't expect the SSD's performance to increase more than 10%, but other optimizations may push the scale to 15%.

It shouldn't come as a surprise to see the top three performance slots going to Samsung products during the QD2 sequential read workload. Samsung's TLC still outperforms the other MLC SSDs, and that is partially why this review had to come before some of the other pending TLC-based NVMe products.

Sequential write performance does not scale with NVMe products as the queue depth increases, at least not the consumer SSDs we've tested. The PM961 512GB delivers just under 800 MB/s with the workload falling between the SLC buffer and native TLC. The only other product on the chart with 3D TLC flash is the Intel SSD 600p, and it trails the PM961.

Until today, we haven't been able to see the underlying performance of Samsung's TLC V-NAND (what I refer to as "native TLC performance"). The 850 EVO products don't suffer the same performance degradation as other SATA TLC-based products with non-Samsung flash. The performance never dropped below the sustained performance of SATA SSDs. The PM961 uses TurboWrite, Samsung's name for an SLC buffer, and it delivers roughly 1550 MB/s with a 128KB data block size. The native TLC performance (with just two NAND packages) delivers right around 650 MB/s! Most companies with 3D TLC would be happy to achieve 650 MB/s from SLC cache bursts, let alone from the underlying TLC NAND.

We place a lot of emphasis on low-QD random read performance because it has a direct relation to the user experience (it's the smile benchmark). Again, Samsung dominates the top three positions with the enterprise-derived 750 400GB close behind at queue depths 1, 2 and 4, which are the tests that matter for consumer use.

The PM961's performance levels out at queue depth 16, but you have a better chance of eating dinner with a supermodel tonight than reaching that level during a normal consumer workload. The PM961 falls a few marks behind the Samsung MLC V-NAND SSDs at QDs 2 and 4, but it is still higher than the other SSDs that form into a lower tier.

Until this point, the Samsung PM961 has performed very well, but now we see the effects of early firmware and programming. The PM961's mixed-sequential performance trails all of the other drives in the chart. The performance never drops below 450 MB/s, so we still get better-than-SATA mixed-sequential workload performance. We would like to see Samsung address this issue in the retail 960 EVO version. Samsung will target the professional workload market with the 960 Pro, but even mainstream users will want to encode video at high frame rates. It's not that the QD2 450MB/s performance is awful, especially compared to SATA SSDs, but it could be better.

The mixed random results are also lower on the PM961 compared to its MLC competitors. With both lower sequential and random mixes, we suspect Samsung has yet to optimize the firmware for mixed workload performance. The PM961's performance slides in-between the Intel 600p and the Zotac Sonix.

The two TLC-based products drop to the bottom of the sequential steady-state charts, and that shouldn't surprise anyone. The MLC-based Hellfire mixing it up with the TLC drives is surprising, but we will save that commentary for another day. Samsung doesn't advertise or push the EVO series for video editing or other professional applications, so the results won't sway us from taking a serious look at the upcoming TLC-based NVMe product.

TLC cuts the steady-state random write performance in half compared to Samsung's MLC SSDs. Normally we wouldn't consider a mainstream product for RAID use, but the PM961 delivers solid, consistent performance. With some of the other products, the performance ebbs and flows (which is what you don't want). The PM961 is very consistent, and that helps in consumer RAID 0 arrays.

The Polaris controller didn't play well with our Asrock Z170 motherboard in RAID when we tested the Samsung SM961 1TB. The Z170 board would only operate for a few seconds to a minute before entering a fault state and restarting. Some users have reported more stability with other motherboards. OCZ was the first company to reveal that some NVMe SSDs have issues with the Intel PCH RAID. The company released the statement and even put it on the retail box; "don't use this product in RAID mode with Intel's onboard RAID." We will revisit the issue when Samsung releases the retail products with the Polaris controller.

All of these products deliver higher performance than what any SATA-based SSD can provide, with the Intel 600p being the only exclusion. The more difficult your workload, the larger the performance gap. The NVMe and PCIe combination frees the flash from the low SATA interface ceiling that constrains peak performance.

Samsung didn’t design the PM961 to be the best NVMe SSD available. The PM961 is part of a new class called "SATA-replacements," which are designed to get us off the SATA bus without the high cost normally associated with PCIe-based storage. The same tricks the manufacturers used to make SATA SSDs affordable are in play again; we will see a reduced number of controller channels and increased use of TLC NAND, which reduces costs and makes the technology more accessible.

Watch your step coming down from the Samsung 950 Pro. Samsung armed the 950 Pro with 32-layer 128Gbit die to provide unparalleled performance. The newer 48-layer flash only needs half the die to reach the same SSD capacities, but the reduced parallel operations stands out like a beacon for the SM961. The PM961 with TLC flash follows with a 100 MB/s drop-off from its MLC-equipped twin.

We really focus on the recovery phase of the test because the PM961 is a consumer product. There are five to six products that stand out in the top performance tier, and the PM961 trails that group, but it still outperforms the Intel 600p and Zotac Sonix by a hefty margin.

Looking at the wide-angle view with all of the workloads, the PM961 512GB gives us a scare, but performance looks much better during the all-important recovery phase. Here, the drive can take advantage of the TurboWrite SLC buffer to keep its service times low.

In this test, we measure the amount of time the products actually work to complete the same task. The PM961 512GB takes longer than many of the other products to finish manipulating the test data. This sometimes carries over to the notebook battery life test, but the recovery section of the test still shows very good performance and we don't expect much carryover under lighter workloads.

Samsung takes the top three spots again, but this time we find it leading the notebook battery life charts. TLC uses more power than MLC because of the eight power states that it uses to identify the three bits stored in each cell. The SM961 and PM961 are right together, but we don't want to put too much emphasis on this test now. Power optimizations are one of the last areas addressed in firmware development, so it's possible that Samsung could nudge a little more power performance from both of the new NVMe products.

The two new Samsung NVMe SSDs deliver higher performance on battery than the 950 Pro. Patriot did us a real favor when it released the Hellfire without any power optimization for notebook battery use. The drive delivers the highest workload performance, but also the worst battery time. If the Samsung SSDs ran the same way we would see a score at (or close to) 2000. Running on battery power with reduced bus speeds and low power states reduces performance by ~25%. Most of the reduction stems from the drive transitioning in and out of the low power states, which creates additional latency.