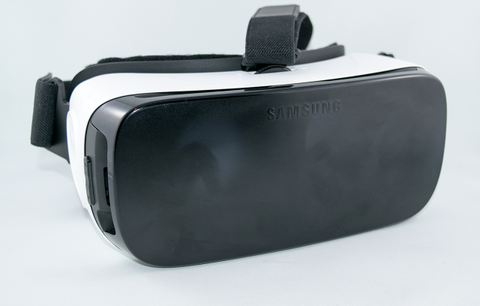 Samsung's Gear VR is the first mainstream VR headset, but it's not without its flaws. It is a great first effort and has a lot going for it. Unfortunately, the frequency with which the phone overheats while you're using the headset will disappoint many users. VR enthusiasts will enjoy what's offered, but the limitations may put off the average consumer.

It's been a long wait for mass-market virtual reality, and while we're not quite playing with the likes of the Oculus Rift or HTC's Vive yet, the Gear VR from Samsung and Oculus promises a glimpse at what the future holds. And you don't have to wait untold months to try it out. You can get a Gear VR today.

Samsung's Gear VR isn't the first VR headset available to the mass market, but it is the first head-mounted unit getting mainstream attention. The company partnered with Oculus to make the Gear VR hardware and software library stand out from the rest of the competition, and the two companies have put significant effort into getting the word out to the public.

In the next few months, we're going to see the big three VR headsets hit the market, but those products are going to come with high price tags that will limit their initial sales potential. Headsets designed to use your existing smartphone are much more affordable and therefore much more accessible.

For many people, a smartphone-derived experience will be the only VR they will have access to in the first generation of consumer VR. But with so many different competitors, does it really make sense to buy into the premium entry in this market?

What's In The Box?

Samsung's Gear VR HMD comes packaged in the same kind of box that houses the company's Galaxy phones, only somewhat larger. The headset is tucked snugly into a plastic insert along with the instruction manual and the two parts of the head strap.

One of the first things I noticed when I first pulled the headset out of the box was just how light the Gear VR really is. Brendan Iribe talked about how light it was when he announced the final product at Oculus Connect 2 in September, but it's hard to articulate what that really feels like until you have the device in your hands. The whole thing, even after installing the straps, weighs only 320 grams (Samsung claimed 318 g, but my scale read 320 g). With the phone inside the Gear VR, the headset weighs 457 g, but it feels significantly heavier. I suspect the uneven weight distribution affects the perception of weight.

The Gear VR headset, despite feeling so light, doesn't feel cheap. It's clear Samsung paid attention to the fit and finish of its first foray into consumer VR. This should be expected after the company released two previous innovator editions, which were effectively beta tests for the hardware. The device's structure feels sturdy, and even when I tried to stress the plastic, there were no creaking sounds, nor did it feel fragile while I did so.

The main body of the Gear VR is made of white plastic. On the right-hand side of the white section, you'll find a touch-sensitive D-pad and a reset button. Samsung tried to add some tactile feedback to the touchpad by adding a ridge around it and embossing the D-pad, which helps to situate your fingers in the right location. At the center of the touchpad is an additional button defined by its own ridge, helping you find the button. This button is used to select menu items and serves as an action button in games, though in practice, just touching the touchpad anywhere usually has the same effect.

The section that holds the phone is made of black plastic, which contrasts nicely with the white body. This section is attached to a mechanism that slides the section forward and back within the white body and is adjusted with a dial found on the top of the headset. The motion adjusts the focus for different eyesight, but the Gear VR instructions indicate not to use glasses with the headset. Samsung suggests wearing contacts if corrective lenses are necessary.

The adjustable section is also home to the volume controls, which can be found on the right side directly in front of the touchpad and the reset button.

The Gear VR is engineered to work with Samsung's Galaxy S6, S6 edge, S6 edge+ and Note 5. It can accommodate any of these phones without any adjustments. Samsung and Oculus came up with a clever design that automatically adapts to the varying sizes of these phones.

Along the top and bottom edges, near all four corners, there are three different-size rubber tabs that secure the phone. These tabs are spring-loaded, so they are pressed into the headset to get them out of the way if a phone with larger width is used.

The phone attaches to the headset via the micro USB port on the bottom of the phone. A male micro USB plug is found on the right side (when you're wearing it) of the Gear VR face. It's on a hinge to make removing the phone as easy as possible.

The section with the plug has two positions: A and B. Position A is for the larger Note 5 and S6 edge+, and position B pushes the connector closer to the center to accommodate the smaller S6 and S6 edge phones.

To adjust which position the plug is in, simply press down and slide it back and forth. There is a release button directly below the plug. It's possible to move the plug without pushing down, but this method is much harder on the mechanism, which will likely wear out quickly or even break if you remove it this way.

The opposite side has a clamp that automatically adjusts to size, because it is spring-loaded. When a phone is popped into the Gear VR, the clamp tightens up against the phone, making for a secure fit. The clamp also doubles as way to eject the phone.

Pull back against the heavy spring of the clamp, and it will pivot outward. The bottom of the clamp pushes the phone away from the headset. The hinged micro-USB plug on the other side ensures you won't have to worry about damaging the charge port of your smartphone. Just be sure not to twist the plug when you remove it.

Samsung and Oculus engineered the Gear VR to support many sets of headphones, but the companies didn't include an audio pass-through port in the design. Instead, there is an extra gap next to the volume-toggle buttons that provides direct access to the phone's headphone jack. A right-angle plug will likely not fit, but the space is large enough that it would be hard to find a straight plug that didn't fit.

I found it difficult to reach the plug with the cover installed over my S6, but once the plug was in, the cord did not interfere with putting the cover back on.

On the bottom right of the headset, near the D-pad, a micro USB port can be found, which lets you connect your phone to a charger without removing your phone from the Gear VR headset.

The Gear VR is, of course, designed to be attached to your face, so it's important that it have a comfortable fit. The headset includes a foam cushion to give it a soft feeling. The cushion is easily removable, held on simply by very fine Velcro, which should help when cleaning the material.

The Velcro is molded into a rubberized barrier that lets the headset fit around the shape of your face.

There is a large opening for your nose, though the cushion somewhat obstructs this opening. If you have a wide nose, you may find the fit to be a bit tight. I found the cushions squeezed my nose just enough to obstruct my breathing slightly, necessitating that I breathe through my mouth while using the Gear VR.

The head straps for the gear VR come in the box, but they aren't attached to the headset. You have to attach them yourself. The strap comes in two separate pieces. One part attaches to two loops on the sides of the headset and wraps around the back. It is held on with Velcro and is actually very easy to install. Simply flip the hinge of the loop outward and slide the strap through, starting from behind. Make sure the side with the leather backing is facing inward while you slide it through. You want the Velcro to be on the outside so it can be adjusted while it's on your head. The strap incorporates some elastic fabric, so if you aren't sharing the headset, you can set it and never have to adjust it again. The stretchable material allows the headset to be taken off and put on again without playing with the Velcro.

The second half of the strap goes across the top of your head. This requires attaching an additional loop to the headset, directly behind the focus dial. The top strap works the same way as the one that goes around your head, adjusting with two Velcro attachments. This strap doesn't have any flex to it, but the Velcro can be positioned anywhere along to top. So it should accommodate even the smallest of heads.

On the inside of the Gear VR, you'll find the two lenses that you must peer through to see the screen. These lenses provide a 96-degree field of view, which is 14 degrees less than the Rift will have. Unlike some of the other headsets on the market, the Gear VR does not provide a way to adjust the distance between the two lenses. The lenses sit 2 centimeters apart from each other and feature a 2mm bezel. Fortunately, the lenses themselves are 3.5 cm wide, so with the distance adjustment, most people should find a comfortable view.

Between the two lenses you'll notice a small sensor that detects when you put the headset to your face. This helps conserve battery life on your phone by turning the screen off until the Gear VR is actually in use.

The Gear VR includes a cover that really isn't necessary; its only real purpose is aesthetic. The cover is made of a dark, translucent, plastic material. It snaps on at all four corners, but it isn't very secure. It certainly doesn't add any reinforcement to hold the phone in place. It may prevent damage to your phone if you ever dropped the headset, but that's not a test I'm willing to perform.

Next Page Setup, Testing And Final Thoughts
12 Comments Comment from the forums
Be In the Know