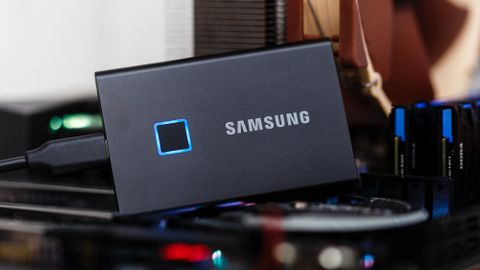 Today, we pit the T7 Touch against a collection of competing 10 Gbps SSDs, as well as a few outliers to show the value in its performance. To start, we include the SanDisk Extreme Pro, LaCie Rugged SSD, Lexar SL100 Pro, and Adata SE800. As a value-oriented 10 Gbps portable SSD, we threw in Crucial’s X8. And with its comparatively pokey SATA interface, we also included the SanDisk Extreme. We also added in the Samsung X5, a thunderbolt 3 SSD,  WD’s My Passport and LaCie’s Mobile Drive, both portable HDDs.

Samsung’s T7 Touch isn’t the fastest 10 Gbps SSD you can get, but when transferring your favorite photos, video, or documents from your system to the T7 Touch, it will provide ample performance. It ranks sixth place during the write transfers and ups that to fifth place during the read tests.

PCMark 10 is a trace-based benchmark that uses a wide-ranging set of real-world traces from popular applications and common tasks to measure the performance of the storage device. To test drives that store files rather than applications, we utilize the Data Drive Benchmark.

Samsung’s T7 Touch once again falls behind the pack here. In PCMark 10’s Data Drive Benchmark, it ranked in 7th place overall. Every 10 Gbps SSD outperformed it, but the Samsung drive still provides higher performance than the SATA-based SanDisk Extreme, and scored similarly to the Extreme Pro overall. As should be obvious, it delivered much better performance than the HDDs.

In ATTO, we tested Samsung’s X7 Touch at a QD of 1, representing most day-to-day file access at various block sizes. While it managed to peak at 952 / 884 MBps read/write at the 8MB file size, most of its competition hit higher highs. As well, competing drives seem to provide better performance at smaller block sizes too, which showed in our file transfer results.

Samsung outfits the T7 Touch with what seems like a 45GB write cache at the 1TB capacity. After writing to the drive continuously at about 930 MBps, it was able to write another 45GB after just 30 seconds idle time. So under average use, it should suffice. But, for those who manage large files daily, the T7 Touch isn’t the best candidate for the job. After the write cache fills, write speeds degrade to about 500-600MBps.

Temperatures weren’t an issue for the T7 Touch either. Samsung rates it to stay below 45C at room temp. When transferring over five hundred gigabytes of data to and from the SSD, its surface temperature managed to stay under 44C with no airflow.