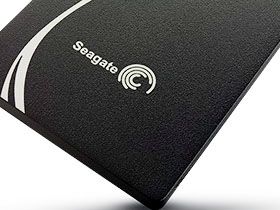 Seagate raked in almost $15 billion in revenues last year. Not much of that came from its enterprise-oriented Pulsar line of solid state drives, which first surfaced in 2009. But Seagate knows that, even though it'll always be a hard drive company first, branching out into the SSD space is increasingly important as time passes.

There are lots of little reasons why SSDs make sense. Disk drives are terribly complex, requiring tons of components and robotically-precise assembly. By contrast, SSDs are pretty easy to put together. Just slap components on a PCB and you're done. That's a big departure for a company familiar with sourcing or building some two hundred different parts for every hard drive it sells.

So, Seagate's strategy for the consumer space is pretty simple, then. Offer a trifecta of storage options, from cheap and cheerful mechanical disks to solid-state storage, and a strange union of the two in between: solid-state hybrid drives. Over time, revenue from flash will increase as SSD adoption picks up from lower prices, and having a better product mix can only help matters. Factor in a remix of enterprise-oriented solid-state storage options, and Seagate appears to have a comprehensive assault on the space all planned out.

And that's where Seagate's new 600 SSD family comes into play. Designed for the ubiquitous consumer and client storage applications, Seagate leaves the heavier lifting to its 600 Pro (Seagate 600 Pro-Series 200 GB SSD Review: For The Enterprise), 1200, X8 Accelerator, and (somewhat outdated) Pulsar lines. That frees up the 600s to compete on value and lower cost per GB. The company might be facing an uphill battle though, since Seagate is probably the last name that comes to mind when you think about solid-state drives. Is there anything the 600 can do to change that?

Technically, there's a lot of overlap between the 600 and 600 Pro. For client and light enterprise applications, the 600 Pro adds more over-provisioning and power loss protection. The standard 600 getting reviewed today does away with those two features, presumably for more competitive pricing. The 600 ships in 120, 240, and 480 GB capacities, and will eventually be available in a 5 mm form factor for environments that require super-slim drives. Those skinny models may or may not utilize a traditional SATA connector, so most folks will probably find themselves looking at the more common 7 mm version when they start moving in greater volume.

The 600's specifications are fairly competitive, though slightly vague. Claims of 400 MB/s sequential writes and 500 MB/s sequential reads are pretty common, really. Random performance is just on the cusp of more elite offerings. So, all's well on that front.

Actually, the most interesting line items aren't performance-related, or even the projected 0.58% Annualized Failure Rate. The 600's three-year warranty coverage has the equivalent of a mileage restriction on it. You get three years or 72 TB for the larger two drives, whichever comes first, and half as many writes for the 120 GB model. We're not fans of this. While it's true that most users won't ever come close to those numbers, we don't want to see vendors adding caveats to their coverage. Most of the big SSD companies are pushing five-year guarantees on most of their products as Seagate lays the groundwork for dragging warranty protection into post-flood hard drive territory. Let's hope this doesn't catch on. Ever.

Warranty shenanigans aside, opening up the 600's rugged metal chassis to get at the good stuff is fairly easy. Seagate warns reviewers that popping the enclosure will destroy the drive (as if that'd stop us). But the process is fairly easy. Just unceremoniously yank the bottom chassis cover's metal tabs out of the top half. There are no tiny screws to lose, no fuss, no mess, no sad or broken SSDs. Naturally, the bent metal and twisted tabs make it obvious that someone tampered with the drive, and that's probably the point.

The chassis' top housing is sturdy and feels great in-hand. That's almost completely irrelevant in a review, but when you spend as much time handling solid-state storage as us, quality construction is easy to appreciate. The textured black top housing also has an extension to mate up with the controller, drawing heat away from the logic and into the metal chassis.

Speaking of controllers, it's not surprising to see Link_A_Media Device's (now SK hynix memory solutions') LM87800AA processor at the heart of this desktop-oriented drive. Seagate was once an equity partner in LAMD prior to SK hynix's purchase. LAMD controllers power Seagate's Pulsar.2 enterprise offerings, and now the eight-channel design finds a home in the 600.

Next to the controller are two 128 MB Micron DDR2-667 DRAM packages. This 240 GB model uses just 256 MB of total cache, but the 480 GB model comes armed with twice that amount for page mapping and caching, according to Seagate.

Pairing up Toshiba's Toggle-mode NAND with the LM87800 is a potent combination, which is why Corsair also picked those components for its Neutron GTX. Comparisons between the Seagate and Corsair drives are inescapable, and you'll see the two SSDs go up against each other in our benchmarks.

The 600's 19 nm Type C Toggle-mode MLC flash is very fast, and each of the packages on this 240 GB SSD contains four die, meaning every IC adds 32 GB of capacity. As we saw in yesterday's review of the 600 Pro, there aren't any components on the PCB's naked back; everything fits on the front.