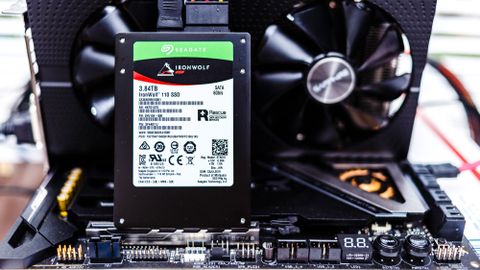 If you’re in search of a new SSD to add to your NAS, Seagate’s IronWolf 110 is a solid pick. It's an expensive beast focused on reliability, with two years of data recovery service included.

Seagate’s IronWolf 110 is a NAS-focused SATA drive with enterprise-grade reliability and endurance. Its primary drawback is its high price. The 3.84TB model we tested sells for $750, and lower-capacity models sell for roughly twice the price of low-end mainstream SATA drives.

Are there a bunch of data and users in the office who need to interact with your business data? Network-attached storage drives are essential to many small and medium-sized businesses for this very reason. They are useful storage devices that enable IT admins or even just your local office IT personnel to consolidate the majority of the business’ data on a reliable network-attached storage array so that users have a safe place to store to and read from.

Seagate‘s IronWolf 110 SSD aims to be the SSD of choice if you are looking to speed up your NAS experience. It was designed to keep going strong, even in multi-user environments that operate 24/7. From using a single IronWolf as a caching device or going all out and building a high-performance RAID array with a few more for multi-gigabytes per second bandwidth, the IronWolf should be able to handle it all.

Seagate rates the IronWolf 110 NAS SSD to hit speeds upwards of 560/535 MBps read/write over it’s SATA III interface. In terms of random performance, the company rates the SSD like an enterprise SSD -- listing sustained performance, not peak like most consumer/prosumer drives The IronWolf 110 is rated to deliver 90,000/20,000 IOPS read/write. Performance suffers slightly on the 240GB and 480GB models, as per the norm, usually due to fewer NAND dies compared to the higher capacities.

Seagate’s IronWolf 110 packs some heavy endurance figures, too. Rated at up to seven terabytes of writes, our 3.84TB IronWolf 110 test drive boasts some of the highest warrantied endurance ratings out of any consumer NAND flash-based SSD. Seagate backs the IronWolf 110 for up to 5-years -- if the amount of data written to it doesn’t surpass the endurance rating, that is.

On top of the standard warranty, the IronWolf 110 SSD includes a complimentary 2-year Rescue Data Recovery Services plan. So, in the event your SSD were to fail within the plan’s time, you can send it out for recovery and hopefully get your data back.

Seagate offers a few downloads for the IronWolf 110, too. SeaTools is a simple-to-use diagnostic tool that checks your drive’s health. DiscWizard is Seagate’s locked-down version of Acronis True Image HD drive cloning software, but it doesn’t recognize the IronWolf 110 as a Seagate drive. Hopefully the company will fix this in an update soon. Then there is SeaTools SSD, which allows you to monitor your drive, update the firmware and more.

Additionally, Seagate is working on offering IronWolf Health Management (IHM). This is another piece of software for those using the company’s SSDs in a supported NAS. At this time, Asustor, QNAP, QSAN, Synology, TerraMaster, and Thecus all support IronWolf Health. Unfortunately, it was not available for download at the time of publishing.

The IronWolf 110 is built like most enterprise-grade SATA SSDs. It comes in a 2.5-inch 7mm form factor and has a solid metal casing. Seagate made sure to take thermals into consideration to keep the components on the PCB cool. Strangely, the company decided to use a bunch of thermal paste instead of thermal pads, but it works the same.

Also, the drive comes with onboard polymer tantalum caps to provide Power Loss Data Protection (PLDP) to prevent data loss if the power goes out while in use. The added circuitry allows in-flight writes to complete and any buffer data to copy to NAND. It recharges upon the next power on.

Seagate is tight-lipped about the IronWolf 110’s architecture, so we could only get a few details, but it should suffice to give you a good overview. Powering the IronWolf 110 is a Seagate-branded controller that seems to have some SandForce roots to give it a modern-day edge. Its design is of a DRAM-based architecture and the basics like Trim, S.M.A.R.T. data reporting, and secure erase are all supported.

DuraWrite builds upon this even more, enabling dynamic over-provisioning that compresses inbound compressible user and OS files as they are written to free up NAND space. That extra space, in turn, is used for background operations, helping to increase the NAND’s lifespan by reducing write amplification. The user data appears uncompressed to the end-user, however, so don’t opt for one of these looking to fit more data on the drive than the capacity is rated for.