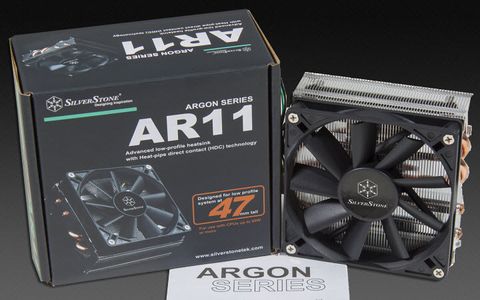 At only $40 the AR11 is a rock-solid cooler that will fit in all but the smallest of cases. Still, builders with extra room may potentially find better performance-to-dollar value in larger coolers.

SilverStone’s latest addition to its Argon Series of CPU coolers takes on one of the more challenging parts of building a HTPC or ultra-compact gaming rig: Size. Shrinking a build typically makes it difficult to find a CPU cooler that provides proper cooling without either making a ton of noise or interfering with other components on the motherboard such as the RAM and PCI-express slots. Thankfully, the AR11 is budget-friendly in addition to being both cool and compact.

With an MSRP of only $40, the AR11 packs performance without bells and whistles such as RGB lighting and stacked fan setups, which are typically found on larger, more expensive coolers. Its hardware kit is equally simple, and includes a brief manual, a small packet of thermal paste, and a set of washers and nuts for securing the cooler to the board.

At only 47mm tall, the AR11 is the second only to ID-Cooling’s IS-VC45 vapor chamber as the shortest compact coolers we’ve tested in the past several years. This low height, coupled with it’s 95W TDP rating, provides the flexibility needed to cool most of the builds you’d typically find in most compact gaming and home theater PCs.

The cooler itself consists of an aluminum heatsink connected to four, 6mm thick direct contact heat pipes, topped by a 9-blade 92mmx15mm PWM fan. The AR11’s simple mounting system is Intel specific, and only supports motherboards with Intel 115x sockets including: LGA1150, 1151, 1155, and 1156. For those of you that have or are looking to build AMD based systems, SilverStone still has you covered with the similar, albeit slightly taller Krypton KR01.

With no hardware to mount to the motherboard, installing the AR11 is about as simple as it gets. After applying thermal paste to the CPU, you place the cooler over the CPU and secure it in place by installing and tightening the provided washers and nuts on the reverse side of the board.

After a quick, hassle-free installation, the AR11 is solidly in-place and ready to go for testing.

We’ve retained the hardware configuration from past reviews while comparing the Argon AR11 to it’s compact rivals. We’ve included the Noctua NH-L12’s results to serve as both a baseline reference and to illustrate the performance benefits of a larger cooler.

As always, we maintained the ambient temperature of the test at 26°C (78.8°F) and recorded the noise levels 0.25m from the case’s front corner on the side that opens. Next, we corrected them to the 1m industry standard by subtracting 12 decibels.

Despite being 11mm shorter than its taller cousin the AR06, the AR11 manages to mostly keep pace with matching temperatures at 50% fans and with only a small gap at full fan speed. Unfortunately, this gap widens when we compare the AR11 to ID-Cooling’s vapor chamber cooler, and the larger down-draft style coolers from Reeven and Noctua.

The AR11’s increased fan speed and more aggressive fan design come together to produce an idealized airflow through the cooler of 55.76 CFM compared to the 40.2 CFM of the AR06. This increased airflow allows the AR11 to maintain roughly the same temperature performance as the AR06 even though its heatsink is significantly smaller.

Surprisingly, the AR11’s increased fan speed doesn’t translate to increased noise. Instead, the cooler performs more or less the same as most of the others in today’s test.

The AR11 runs hotter than all of the other comparison coolers just as the IS-VC45 runs louder than the others. In both cases the performance difference is great enough for both coolers to trade efficiency blows in last place.

Raw efficiency isn’t everything though, and the AR11’s low $40 price-tag leaves it almost tied for second place in performance-to-dollar value at 50% fans, and solidly in third place at full fan speed.

The AR11 is a rock-solid cooler whose compact size gives it the ability to keep your CPU cool in all but the smallest of compact gaming or HTPC cases. However, even with solid performance and value for its size, those with the space to spare will find that the AR11’s performance falls behind when compared to its larger competition. That said, those with the space to spare may be able to find better performance or value by moving up to a larger cooler like the $30 Reeven Brontes.