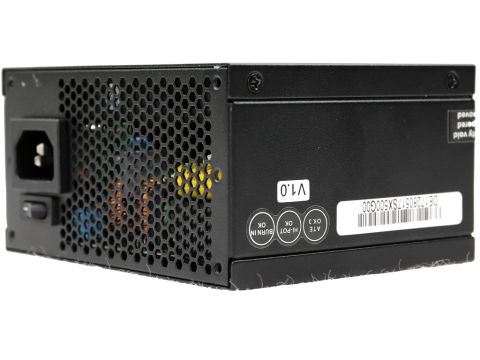 It is nice to see an SFX-based power supply demonstrating an almost-20ms hold-up time, and with an accurate power-good signal.

Measured inrush current is normal for a 500W PSU.

The first set of tests reveals the stability of the voltage rails and the SX500-G's efficiency. The applied load equals (approximately) 10 to 110 percent of the PSU's maximum load in increments of 10 percentage points.

The load regulation we measure on each rail is fairly tight, particularly on the 5V rail where SilverStone's SX500-G takes the lead from every other SFX and SFX-L PSU in our comparison charts. Despite the lack of a semi-passive mode, the PSU's fan spins slowly under light loads. Thus, its noise output remains low as well. From our 80% load test and beyond, the fan profile gets more aggressive to protect the PSU from overheating.

With 20% load, the PSU is close to the 80 PLUS Gold level's 87% efficiency requirement. At 50% and full load it easily satisfies the corresponding requirements, despite our grueling test environment. Notice the huge differences between input and output temperatures in the table above. Clearly, the fan does a good job pushing heat from the SX500-G's internals.

Prev Page Teardown & Component Analysis Next Page Efficiency, Temperature & Noise
3 Comments Comment from the forums
Be In the Know