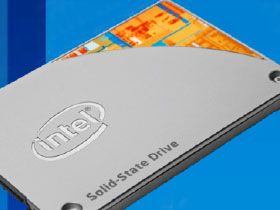 Intel's decision to move away from its own proprietary SSD controller on the desktop was met with simultaneous excitement and trepidation from enthusiasts. After all, the company's reputation in the storage space was earned with products like the X25-M and X25-E (historically awesome drives, if ever there were any). As the era of 6 Gb/s SATA storage was ushered in by SSDs like Crucial's C300, and hit full stride with controllers from SandForce, it became clear that Intel didn't plan to drop an updated processor to enable the faster interface's peak potential, as it had for SATA 3Gb/s.

After a short-lived stint with Marvell's sweet 88SS9174 controller in its SSD 510 series, Intel flipped the script and ran into SandForce's waiting arms. The first fruit of that admittedly unexpected union, code-named Cherryville, became the SSD 520. And that's pretty much where the story ends.

With Cherryville anchoring the Non Volatile Memory group's desktop-oriented offerings, the next few product introductions were hardly unexpected. After the SSD 520, Intel released its SSD 330, which employed the same basic formula with lower-binned flash and a correspondingly more affordable price tag. Then, the company took its SSD 330, swapped in 20 nm flash in place of its 25 nm NAND, and launched the SSD 335. Throughout, Intel's SSD 520 remained a premium product, priced to reflect that fact. Its SSD 330 and 335 were comparable performers, but with three-year warranties instead of five-year coverage.

Surprisingly, the SSD 525 wasn't the revamped 520 we might have expected. Rather, it was an SSD 520 shrunk to fit the mSATA form factor, armed with new capacity points, and flashed to the latest firmware.

The real SSD 520 successor recently became available in the SSD 530. And unlike the previous generation, Intel's new model number includes 2.5", mSATA, and the M.2 form factor. All told, there are 14 new products sporting SSD 530 naming.

That's a lot of new storage hardware, right? There are six SATA drives, four mSATA models, and four M.2-based offerings. It's unclear whether the forthcoming mSATA-based drives will supplant the SSD 525 series altogether, but that mSATA-only family is made up of six products. The 30 and 60 GB SSD 525s don't have an SSD 530 equivalent, so their futures could be tenuous.

By the end of today, we want to know whether the SSD 530 is an SSD 520 with 20 nm flash or something more. The answer isn't as simple as our question though, so let's dig in.

Getting to the SSD 530's insides isn't particularly difficult. Disappointingly, it does require marring the super-fresh sticker, which hides the last screw. Consider it the most attractive warranty seal we've ever seen. With security trappings out of the way, the 180 GB model's PCB is held in place by hope and the drive controller's thermal pad.

Given 180 GB of capacity, we were already expecting six or 12 NAND emplacements, which is exactly how Intel configures this drive. We find 12 packages labeled 29F16B08CCMF2, each packing two 64 Gb dies manufactured at 20 nm. The C (fifth character from the end of the part code) represents dual die packages, whilst the F (next from last alphanumeric) translates to 20 nm. Simple, right?

When I first learned that Intel was designing its mSATA-based SSD 525, I was sure that it would use the revised B02 SandForce controller. It didn't, though. And yet Intel still managed to deliver good power consumption figures. I was even more confident that the SSD 530s would employ the updated processor, and this time I was right (in a manner of speaking).

At least technically, this isn't a SandForce-branded processor. Neither Intel nor LSI would comment on the record, but officially, this is an Intel BF29A41BB0 controller. Underneath all of that fancy cladding is mostly a SandForce 2281 B02-stepping storage processor. The LSI branding underneath Intel's part number indicates that this really is LSI technology, fabbed by TSMC in Taiwan. As for unique tweaks that may exist, nobody is talking. So, I'm not going to call it an Intel BF29AS41BB0 when it's most easily recognizable as a SandForce controller.

There are some new features, though performance falls in line with what you'd expect (assuming you were expecting numbers similar to every other drive with a SandForce controller). The new stepping really emphasizes power consumption, adding not only support for the DevSleep initiative on supported platforms, but incorporating lower active idle power use, too. Otherwise, the most influential capabilities are reserved for SandForce's next-gen controller.

That's the long and short of it. Intel's SSD 530 is predominantly a 520 with updated bits and pieces, and therefore two other drives spring to mind as we look around the lab for hardware to test against: the original SSD 520 and the mSATA-based SSD 525, both also at 180 GB.

Next Page Inside The Box, Test Setup, And Benchmarks
17 Comments Comment from the forums
Be In the Know