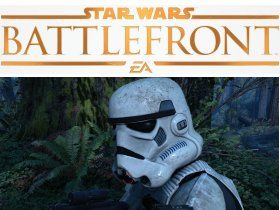 This isn't a game review. Star Wars: Battlefront doesn't have a single-player campaign anyway, and debating the pros and cons of the title's map design is a futile effort. There are a few single-player and co-op missions that ease new players into the game. But there's certainly not enough content to keep an offline player engaged for long.

We'll leave the opinions about game play to the software reviewers and concentrate our efforts on the playability of Star Wars using different hardware configurations. When it comes to graphics, EA scores major points. Its proprietary Frostbite 3 engine now employs physics-based rendering (PBR), which is used to great effect.

Using physics to model the interactions between lighting, surface structures and materials is popular these days. This approach might trivialize the underlying laws, but it's undeniable that the end result is a more realistic visual experience.

This way, the developers kill two birds with one stone, simplifying programming/minimizing potential errors and dialing back hardware requirements, since optimized libraries take care of the heavy lifting.

A nice side effect is the lighting model (Global Illumination) that everything's based on. It looks great on even the lowest-end graphics cards.

The vegetation and character models from the Star Wars universe are very detailed, owing to great textures and ample geometry.

Additional algorithms can be used to automatically make an object simpler. For instance, unnecessary or invalid surfaces can be deleted, and vertices that are very close to each other can be merged. As a (welcome) side effect of this approach, textures can be mapped to vertices exactly since they're generated at the same time. These highly-optimized models yield great performance, even if the environments are fairly complex.

Like most current titles, Star Wars Battlefront doesn't support Mantle or DirectX 12. However, the game's graphics engine is tuned so well that it still runs smoothly and looks good on older hardware.