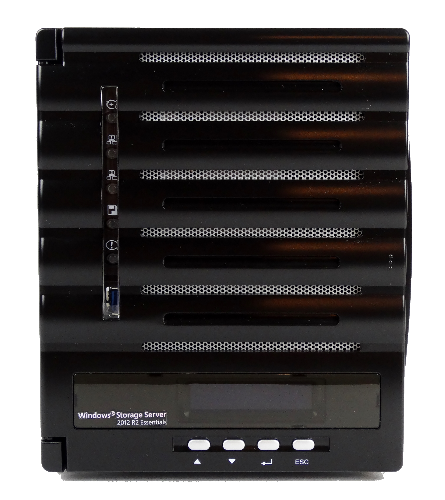 Almost all of the software features come from Windows Storage Server 2012 R2 Essentials, but Thecus does add a few value-added bits as well.

First, let's look at differences between the three Windows Storage Server 2012 R2 versions to find where Essentials fits in. Microsoft broke up a lot of the features to make Essentials a product with a real need.

All of the Storage Server variants are based on Windows Server 2012 R2. That right there costs roughly $550, and the Datacenter version sells for thousands. The three storage-specific versions bring many of their features down to embedded appliances at much lower prices.

If you haven't used a Microsoft Windows Server OS, many of its capabilities may be new to you. For the most part, the features list is standard in Windows environments, but desktop users rarely need or come across these specific options. Windows Server looks and feels like regular desktop Windows, but there are some areas you'll need to explore and read about in order to configure them.

Server 2012 R2 introduced data deduplication (dedupe) to the Windows storage environment. The feature is included in the Essentials version, and it's amazing. In brief, the technology searches for similar files and remove duplicates. When you open a folder, the data is still there for you to click on, open, run or whatever you want to do with it. After all, the information was never really deleted. It's just combined to save disk space and available in both places. Dedupe incurs a lot of CPU overhead, so we recommend trying different settings to find the right balance for your workload.

Prev Page Technical Specifications Next Page Pricing, Warranty And Accessories
5 Comments Comment from the forums
Be In the Know