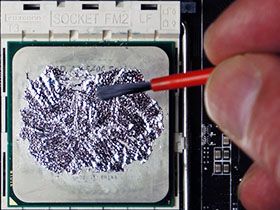 39 Thermal Compounds Get Benchmarked And Tested

If you missed part one of this series, take a quick second and check out Thermal Paste Comparison, Part One: Applying Grease And More.

We Are Curious About Two Special Compound Categories

After discussing the theory of conventional thermal pastes in part one, I want to go into a little more detail about liquid metal compounds, and also shed some light on thermal adhesives, both in paste and pad form. Thermal pads are used to mount small heat sinks on RAM chips or MOSFETs.

But let’s start with those liquid metal pastes. While their theoretical thermal conductivity sounds impressive, that one attribute is no guarantee of success. During the course of our testing, we'll be experimenting with a long burn-in phase and comparing the liquid metal compound to Gelid's Extreme paste.

Several years ago, Coollaboratory broke new ground in thermal management by introducing the Liquid Pro liquid metal compound. But while the look (and subsequent application) of Liquid Pro reminded us of a mercury thermometer that didn’t survive a fall, its successor, Liquid Ultra, is better, avoiding some of the first effort's weaknesses. Because Liquid Pro could be so problematic, I'm only presenting Liquid Ultra in the tutorial section. Both compounds show up in our performance charts, though.

In the Liquid Ultra box you get the paste itself, a cleaning swab, two brushes, a sponge, and an instruction manual. That's an impressive-sounding list, but it's really just the bare minimum to use the product, sufficient for a single application. If you want to apply Liquid Ultra a second time, you'll find yourself without the alcohol swab. At least a second brush is included. While we appreciate the inclusion of the coarse sponge, it's barely adequate for removing the compound. Of course, there's a separate cleaning kit available for a hefty price.

Enthusiasts may be torn about this product, and yes, there may even be those who are more courageous than I and use it on graphics cards. However, my personal opinion is that a majority of the people who read this tutorial are new to thermal compounds, and I wouldn’t want to encourage them to mess around with this stuff due to the skill it requires. I also want to point out that you'll probably void your CPU's warranty if you do use Liquid Ultra. After removing the last remnants of it, we discovered that all of the markings etched into the head spreader were gone. If you still want to try this product after reading our tutorial, you can probably expect very good cooling performance, assuming nothing goes wrong.

The most important prerequisites for using a liquid metal compound are clean heat sink and spreader surfaces. You can buy the aforementioned kit with the three cleaning liquids, or simply snag some isopropyl alcohol at the drug store. However, stay away from acetone and cleaning naphtha. Even denatured alcohol may contain additives that are detrimental to achieving a clean, degreased surface. Finally, make sure you wait until any remnants of the liquid have evaporated!

If the surface is too smooth, the older Liquid Pro and newer Liquid Ultra may only form loose droplets on your CPU. Thus, in contrast to what you would do for regular thermal pastes, you may consider roughing the heat sink and spreader a little bit. Just remember that you only get enough liquid metal for two tries.

Don't overdo this. If you scrub too hard, the innocent-looking sponge can cause deep grooves. Move in small, graceful circles.