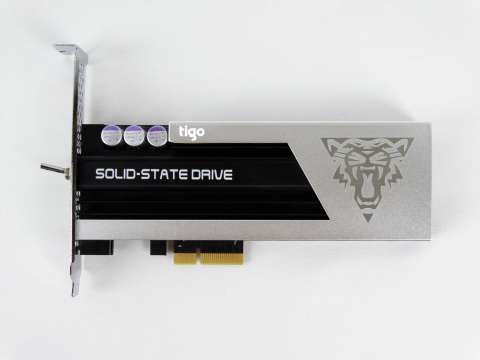 Samsung is running away from the rest of the SSD industry, so other companies have to find new and exciting ways to make interesting products. I think most of us would like to see a straight performance and price war, but that's not the reality. Until other fabs field competitive 3D NAND, we may have to sort through products that use gimmicks to stand out.

The Tigo G5 introduces two new features that we haven't seen on other mainstream consumer SSDs. The power switch is a limited-use feature. I think most users will just set the G5 to the high-power mode and forget about the two low power states. Unless, of course, they accidentally hit the switch while doing something else behind the computer. The high-power position is at the very top, so a heavy HDMI or DisplayPort cable could also potentially toggle the switch into the lower power mode, and in doing so, lower your storage performance.

The Tigo's host power failure protection is an invisible feature. If the power in your home or office goes out, but your computer still works when the power comes back on, you can credit it to the feature. If it works as advertised, you don't think too much about it. Out of 100 power loss events, a regular SSD may still work 99 times. It's the remaining 1% that you should worry about. The Tigo G5 power failure protection targets the 1 out of 100 event, but you may not realize when the drive averts disaster.

We took on this review to test IMFT's 3D MLC NAND flash. Early firmware and the controllers' full 8-channel mode gave us a lopsided view against the Intel 600p, with both points working in opposite directions. That said, we saw enough to understand why our time with IMFT 3D MLC has been limited. It's no wonder Micron ceased production of the Ballistix TX3 SSD. Its specifications were nearly identical to the Tigo G5, and it's clear that product would have had a difficult time in many markets as an M.2 'drive only' product.

The Tigo G5 did show us that IMFT 3D MLC NAND isn't a silver bullet that can take on Samsung's V-NAND. We expect IMFT to announce a second-generation 3D product in the first half of 2017, but we already have some reservations. The second-generation product will double the die density and thus double the block and page size. In theory, this will increase latency even further during the read, modify, write cycle. The flash may have to compete in capacity and capacity per dollar to remain competitive with Samsung, Toshiba and SK Hynix flash. Even with the existing 384Gbit TLC available, there isn't a consumer 4TB SSD with Micron flash to take on the Samsung 850 EVO 4TB.

It's my belief that products like the Crucial MX300 would be very low-cost SSDs if it weren't for an extreme NAND shortage. The high latency makes them noncompetitive with planar NAND SSDs that are still on the market. The industry can't build 3D NAND fast enough to turn the planar NAND flow off completely. At this time, there is profit to be had in anything the fabs can build, and that works against consumers looking for better products with higher performance, higher capacity, and a better overall value. The clock is ticking, though. The shortage should only last for a year. When we get back to a stable market, the winners and losers will separate like oil and water. Until then, there is only one winner, and it's the NAND flash fabs. For now, they can charge any premium they want for flash that we would've called substandard two years ago.