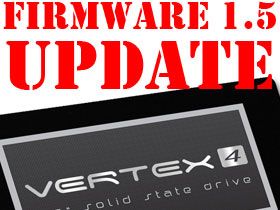 A couple of weeks back, we followed up our OCZ Vertex 4 Review: A Flagship SSD Powered By...Indilinx? story with hands-on time in the lab using a newer firmware version. Normally, it'd be difficult for us to retest a piece of hardware we already reviewed just because the vendor introduced fresh software for it. However, OCZ made big claims about the gains expected from its 1.4 release. We wanted to know more.

In OCZ Vertex 4 128 GB: Testing Write Performance With Firmware 1.4, we confirmed notable improvements in sequential write performance using our 128 GB sample. However, we also discovered that, after writing to more than 50% of the drive's capacity, throughput fell off significantly.

OCZ provided us with an explanation for this behavior, simultaneously suggesting how it procured its extra performance and why speed tapered off after the 128 GB model, specifically, filled beyond 50%. To paraphrase, the company noticed that many folks were leaving lots of space unused on their SSDs. So, it could afford to change the behavior of its garbage collection algorithm depending on available capacity. Below 50%, it'd operate in a "performance" mode. Otherwise, it'd switch back to a more conservative "storage" mode.

One of our goals here at Tom's Hardware is to test the latest hardware thoroughly, so that you can be sure you have a complete look at performance before making a buying decision. OCZ's claim that the Vertex 4 should recover compelled us to collect even more data. We started with a new procedure suggested by the staff at OCZ. But then the company released a new Vertex 4 firmware: a beta version of version 1.5. A week later, it uploaded a final build of 1.5. It's currently available as a stable release on OCZ's support site. Now, we have a couple of new variables to put through our gauntlet.

In essence, it appears that OCZ took feedback on its performance and storage modes to extend the benefits of the former. Naturally, then, we're interested in just how the drive's performance attributes have changed. And of course, the compatibility improvements are certainly good news to anyone who might have been having trouble with a Vertex 4 previously.