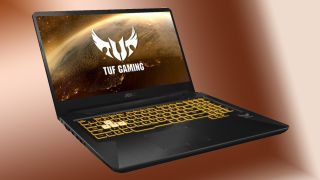 If you’re after a budget gaming laptop deal as this Cyber Monday deals era comes to an end, you’ll be hard-pressed to find anything better than the 17.3-inch Asus FX705DT, which is selling for just $649.99 at Best Buy, down from $999.99. The 5.84-pound laptop packs a capable component pairing of an AMD Ryzen 7 3750H CPU, Nvidia GTX 1650 graphics, 8GB of RAM and a surprisingly roomy (for this price) 512GB PCIe SSD.

The laptop is 1.1 inches thick, so it’s not too bulky. The bezels around the 1080p screen are reasonably slim, and Asus even throws in an RGB keyboard so you can game in the dark -- the way it’s meant to be done.

You’re definitely going to want to be plugged in while gaming. But for productivity or media playback, Asus rates the GX705DT’s battery life at 5 hours. There’s plenty of connectivity, including three USB-A ports, HDMI and Ethernet. Just note that it’s all on the left edge (likely to save money on extra circuitry). The right side of this laptop simply sports a lock slot.