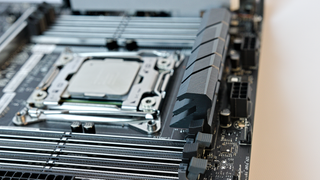 For those who need catching up, LGA 1200 is an upgrade to Intel’s LGA115x socket, which the chipmaker introduced with Skylake back in 2015. True to its name, it has 49 more pins than an LGA115X socket, which should improve power delivery.

This is great news for builders looking to upgrade their CPUs, but perhaps not their CPU coolers.

Noctua's reveal also backs up as tweet from hardware detective @momomo_us, who posted a diagram of what appeared to be an LGA 1200 socket on Twitter. The diagram showed similar dimensions to LGA 115x, which led us to conclude that the heatsink mechanism likely hadn’t been changed. We’re glad to get official word, even if you may still need to purchase an Intel 400-series motherboard to use with Comet Lake-S.

Noctua also added that while many of its older cooler models don’t support LGA 115x or LGA 1200 sockets, customers can order a NM-i115X Upgrade-Kit to make them compatible free of charge.