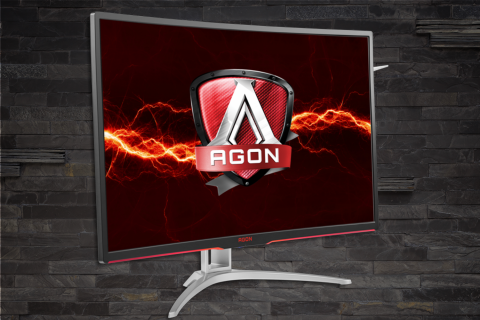 The AG322QCX shows typical VA performance in our off-axis photos. Both the horizontal and vertical planes have a visible red/green shift and a light falloff around 60%. Detail stays strong at 45° to the sides but is mostly wiped out from the top down. There are no problems with the head-on view, and the curve helps alleviate any issues one might have from a screen this large.

Curved panels rarely show any bleed or glow issues. The AG322QCX is a value choice, so it's impressive that it manages to leave the rest of the field in the dust in the white and black field tests. There are no hotspots or other visible artifacts. The black field is dark enough that the monitor appears turned off. With the lights off, you can see a faint bit of light, but it is perfectly uniform.

Color is also comfortably below any visible issue with a 2.04dE variation from best to worst.

Speed differences among the group are very small. All panels operate in a 9-11ms window in the response test. This is about as fast as an LCD is going to get. Even 240Hz monitors aren’t that much faster at drawing the screen. Motion blur is nearly non-existent in this monitor once you go above 100Hz.

For those concerned with input lag, the XG32V is a little faster than the AG322QCX, but 8ms is unlikely to matter to most gamers. When control response is 50-75% faster than a 60Hz monitor, you’re in a completely different league of play.

We found the Agon to be a most-capable gaming screen, worthy of the best players.

The AG322QCX's resolution strikes an ideal balance between detail and performance. The 32” screen shows the occasional jagged line and you can see the pixels when certain textures appear, but these moments are brief and you really have to be looking for them to notice.

Artifacts are only visible when we move the mouse slowly or sit too close. At normal viewing distances and typical gameplay, all we see is smooth motion, deep contrast and excellent color.

We settled on Medium as the best overdrive option. Flicking the mouse left and right rapidly produced slight ghosting when a dark object shone against a light background. But again, during normal gameplay there was no issue.

At Ultimate graphics quality, frame rates stayed in the high 40s for the most part. This is right around the lower limit, but frame rate control stepped in seamlessly to prevent tearing. When FreeSync is properly implemented like it is in the AG322QCX, there is no difference in quality between it and a similarly-spec’d G-Sync monitor.

Our favorite aspect of this new Agon is its contrast. The extra depth and inky blacks are a treat after spending years playing on IPS and twisted neumatic (TN) screens. You'll also enjoy the extra color afforded by the Agon’s DCI gamut.