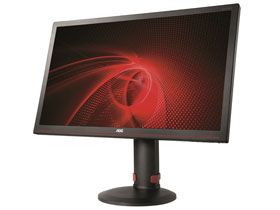 We've reviewed a fair number of FreeSync monitors of late so the newest models are here on the charts today. From Asus we have the PG279Q G-Sync, MG278Q FreeSync and MG279Q, also FreeSync. Acer is represented by the curved XR341CK and the value category is borne by Nixeus' NX-VUE24A. There are three each of TN and IPS monitors in the mix though it doesn't seem like either tech has any real advantage except for IPS' better viewing angles.

The G2770PF exceeds its claimed brightness of 300cd/m2 by a comfortable margin. All the screens here are comparable in output except the Nixeus, which has a less-powerful backlight. The AHVA screen used in Asus' PG279Q has the greatest output by a nose. It's also the most expensive display here.

Black level results cover a wide range but the G2770PF is in the middle group. Dark content is rendered richly with clear detail and no light bleed in our press sample. You can lower this number with the dynamic contrast or Shadow Control options but then some detail will be lost.

Contrast comes in at over 1000:1, which puts the AOC in very good company. Only a VA panel can significantly raise the bar in our tests. Remember that AHVA (used in the PG279Q) is a variation of IPS; not to be confused with AMVA.

AOC has chosen a bright level for the minimum backlight setting. It's a little too much light if you're playing in a totally dark room. We'd like to see a number below 100; preferably around 50cd/m2. That will allow longer work and play sessions before fatigue sets in.

The bright backlight raises the minimum black level and sends the G2770PF to last place in this test.

However, contrast remains rock-solid consistent at 1073.2:1, which is almost identical to the max number. Regardless of settings, the image shows great depth with rich blacks, bright highlights and good dimensionality.

Calibration has a positive impact on black levels and vaults the G2770PF up to second place. Considering that it's value-priced, this looks like a decent panel so far.

Contrast is unchanged mainly thanks to balanced RGB sliders that start at center-range and decent though not stellar gamma tracking. We still recommend using our settings or calibrating for the most natural image with maximum dynamic range and accurate color.

We don't see many screens exceed 1000:1 in the ANSI test. Our sample shows excellent screen uniformity and great intra-image contrast. The G2770PF is pretty much beyond reproach in these tests but as we moved into our grayscale and color benchmarks, we found a few minor issues.