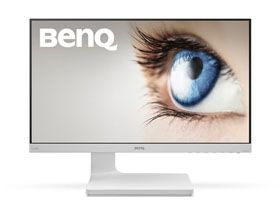 With AMVA monitors being relatively rare in the marketplace, it's taken us a while to actually create a comparison group solely made up of them. The VZ2470H is the seventh such product to come to our labs. Most recently, we checked out the Acer Z35 curved screen. Also in that category is the HP Envy 34c. The 32-inch flat panel format is represented by Asus' PB328Q and BenQ's BL3200PT, which share the same panel part. Rounding out the group is Philip's Ultra HD BDM4065UC 40-inch screen.

BenQ claims a max output of 250cd/m2 and the VZ2470H easily exceeds that level. While not as bright as some displays it offers more than enough light for any task. You might not find it as useful at an outdoor location setting but it has sufficient power to work well in an office.

Black levels are AMVA's strong suit and all of the displays here can render them superbly. While the Philips is likely to remain our leader for the foreseeable future, the VZ2470H manages to be the best of the rest. Even at the maximum backlight setting, you can't tell it's turned on when displaying a full-black field pattern.

That black level keeps the BenQ at second place in the maximum contrast test. The Philips is pretty much in another universe, but 3423.7:1 is far greater than any IPS or TN screen we've tested.

Turning the backlight down to its minimum yields a very dark 22.3096cd/m2. Even with all the lights off that's too dim for our taste. Turning brightness up to 11 (Spinal Tap fans take note) will result in a more-usable 50cd/m2.

The black level is nearly immeasurable at this setting. And it's only a hair higher than the record-setting Philips. This is seriously low.

Contrast remains consistent throughout the backlight's adjustment range with a negligible change from bottom to top, which represents fantastic performance. In practice, any of the displays here will render a superior image to a TN or IPS monitor.

The VZ2470H stays in second place and gives away nothing to the Philips after calibration.

We were concerned that the RGB adjustments, which start at the top of their ranges, would reduce contrast although there's plenty to spare here. Our fears were unfounded as the final result is visually indistinguishable from the VZ's default state. Calibration can only help this monitor though it looks great out of the box as well.

The panel quality here is very impressive at this price point. When ANSI and sequential contrast values are this close it means solid engineering and quality control are in play. As one of the least-expensive monitors we've tested to-date, saying we're impressed would be an understatement.