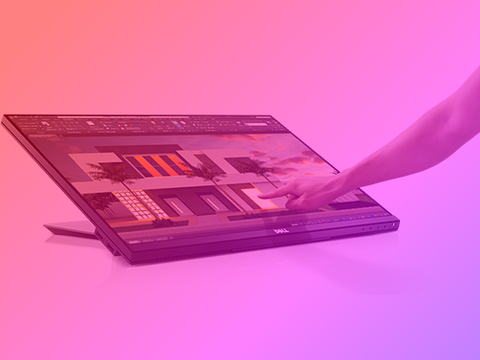 At 24”, the P2418HT is best used by a single person. Collaborations are a little difficult given the screen area and the viewing angles of a typical IPS panel. While certainly better than TN, you’ll still see a noticeable color shift and light falloff by the time you move 45° off axis. Performance isn’t any better in the vertical plane with a similar loss of output and a change to green. This monitor's best use is as an input device rather than for presentations.

Our sample showed some hotspots in the lower third of the screen which hurt its black field score but didn’t affect the white field or color tests too badly. It’s certainly possible that when used over time, this will change from the constant pressure placed on the TFT layer. We’d have to do a long-term test to see just how that would shake out. But our sample shows decent quality in all but the darkest content, with smooth even tones once the brightness gets above 5% or so.

Traditional shooter games will require a mouse and keyboard for the foreseeable future, so these tests may be of greater interest to players of more casual fare or developers looking to add touch-capable titles to their libraries. Response is typical of a 60Hz IPS panel at 25ms. Blur is minimal and can be further reduced with the P2418HT’s well implemented overdrive feature. Input lag is on the low side for this group at only 70ms. This is traditional signal lag, not touch lag, which we have no way of measuring. Dell claims 35ms for that spec, and our hands-on tests showed no significant delay in response to control inputs. Speaking of that…

If you are using the P2418HT with a Windows 7, 8.1, or 10 PC, you won’t need any additional drivers to enable the 10-point touch function. Basically, you can touch the screen rather than reaching for the mouse for point, click, and drag operations. Additionally, pinch-to-zoom is supported in all the apps we tried. This is handy for things like graphics work or if you simply want to zoom in on a photo. It works in graphics programs as well as word processors and web browsers.

We also tried a few casual games where adventure and discovery was the principal goal, rather than action. This monitor is great for hidden-object titles or any game where you'd interact with objects on the screen. And if at any time you’d find yourself wanting to use a mouse or keyboard, they work concurrently. No traditional input devices need to be sacrificed.

Our only concern relates to the screen surface. Rather than the slick glass with oleophobic coating that we’re accustomed to on phones and tablets, the P2418HT has the same 3H hardness plastic front layer as any other LCD monitor. While durable, it will pick up fingerprints over time and it is less smooth. It also has a little give, which translates to a brief glow when pressing down more than gently. We’d love to see a version of this display with a tempered glass surface. That would pick up more reflections, though, so some might consider it a tossup. Ultimately, it will come down to personal preference.

Prev Page Grayscale, Gamma & Color Next Page Conclusion
14 Comments Comment from the forums
Be In the Know