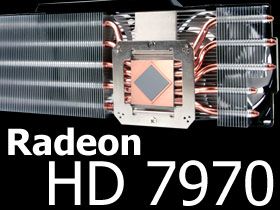 The factory-installed GPU coolers used on today’s graphics cards are generally pretty specific. You can't yank the thermal solution from a GeForce GTX 680 and drop it onto a GeForce GTX 660 Ti. In contrast, the companies that design aftermarket coolers try to make them a lot more flexible, accounting for differences in mounting holes, PCB dimensions, and the varying power and memory circuitry found on one card to the next.

Occasionally, AMD or Nvidia modify things even more dramatically, introducing a new design that sends ripples of change through the aftermarket. And that's exactly what happened when the Radeon HD 7970 and 7950 emerged, both of which come with reference coolers that abandon the typically-flat cooling block design. Instead, they use a large, thick shim around the Tahiti GPU, putting it below the surrounding components and relying on a raised contact area for heat transfer away from the graphics processor.

Of course, this cooler design renders AMD's other implementations unusable on the Radeon HD 7900s. It also torpedoes the multitude of aftermarket designs intended to work with as many cards as possible. Most of the companies that manufacture graphics card coolers are used to dealing with dramatic changes, however, and as we wrote this story up, there were already two vendors selling new products to replace the problematic thermal solution covering AMD's Radeon HD 7970: Arctic's Accelero Xtreme 7970 and Deepcool's Dracula 7970. We previewed the Dracula (sold under EKL's name) in Extreme Air Cooling: Our Five-Slot (Quiet) Radeon HD 7970.

In addition, one other manufacturer came up with a way to use a more generic heat sink and fan combination on the Radeon HD 7900-series cards. The EK-VGA Supreme HF HD7970 Cu Adapter from EKWB Cooling Solutions is basically a copper shim that fills the space between a more standard cooling block and the Radeon HD 7970's Tahiti GPU.

Available at frozencpu.com for $4, the adapter is perhaps the least-expensive solution for anyone who already has an aftermarket cooler and wants to re-use it. But how much efficiency do you lose? After all, the adapter is responsible for transferring thermal energy between two surfaces that'd normally be touching, and paste on each.

Let's consider the other coolers we're testing, too:

AMD's reference cooler for the Radeon HD 7970 doesn't need heat pipes; it instead uses a copper vapor chamber with an array of fins attached. A single 75 mm centrifugal fan pulls air in from the chassis and exhausts out the I/O bracket. Technically, this is the approach we prefer to see taken because it doesn't recirculate hot air inside your case, affecting other components. Unfortunately, the resulting temperatures are merely acceptable, and the noise generated in getting there is pretty unbearable under load.

Do you see the raised GPU contact surface on the vapor chamber? This is what makes the Radeon HD 7900-series cooler unique.

Below is a picture of the naked reference card, showing the thick protective shim surrounding AMD's Tahiti GPU.