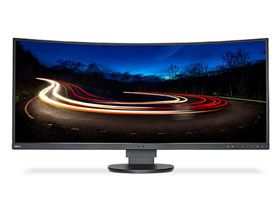 Today’s group is all curved ultra-wide monitors, but due to the nature of the market, all except the NEC are gamer-focused. They feature things like adaptive-sync, fast refresh, and blur-reduction. But comparisons in the areas of color and contrast are fair across genre dividing lines. We have AOC’s C3583FQ, LG’s 38UC99 and 34UC97G, Asus PG248Q and Acer’s Predator X34.

NEC never over-claims brightness levels and the EX341R is no exception. It beats its spec of 290cd/m2 by 11. Curved ultra-wides typically have less output than their flat, 16:9 counterparts, which is not surprising. The problem arises when manufacturers include blur reduction or uniformity compensation. Extra light is needed to compensate for those output-robbing technologies.

Thanks to its SVA panel, black levels are the lowest of the group. The C3583FQ comes in second by virtue of its brighter backlight, but NEC still manages to take the contrast win. A .1251 black level is excellent performance.

The last few NEC monitors we reviewed came with more useful minimum backlight levels than their predecessors. We used to see numbers below 10cd/m2 which has no practical value. 41.7601cd/m2 is a tad lower than 50 but still usable in a completely dark room. The extra screen real estate makes up for that somewhat. The Acer X34 sneaks up to the top of the black level test because its backlight goes down to a ridiculous 16.91cd/m2.

Here you can see how NEC has engineered its uniformity compensation feature. Most of the adjustment happens at the bright end of the scale which results in a reasonable 26% reduction in output. Since there is contrast to spare, image quality holds up well at 1289.5 with uni-comp turned on. Our uniformity tests show that there is little need for the feature in our sample’s case, but it’s good to see some contrast headroom that allows it to be usable.

ANSI contrast is a bit lower than the sequential number, which is usual. And again, we can see that contrast headroom allows uni-comp to do its thing without harming image depth. This is the reason we should all be clamoring for VA panels. That extra contrast does wonders for picture quality. It makes color look more saturated and helps detail pop without the need for edge enhancement.