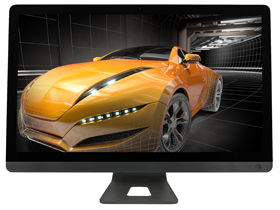 When we review business-class monitors at Tom’s Hardware, it's understood that they're probably not an enthusiast's first choice for a high-performance rig. But the reality is that monitors branded as gaming products aren't much different than less heavily marketed models. In fact, we really only see high refresh rates as the differentiator creating a specific enthusiast focus. All other performance factors start on the same plane, regardless of whether a monitor is aimed at business users or entertainment seekers.

To that end, we always try to look for aspects of performance that appeal to our audience of enthusiasts. And the tests we perform are all centered on one thing: image quality. We’ve established that the best-looking displays will have a wide dynamic range, accurate color, correct grayscale, and a flat-tracking gamma of 2.2. We also look at response time and input lag, as well as screen uniformity and viewing angles. But there’s one component we haven’t addressed before now, and that's clarity. The main reason, of course, is that we didn't have a scientific and repeatable way to measure it. Clarity is largely a matter of opinion, and that is something we try to avoid when we make our recommendations.

That changed when we received Planar’s PXL2790MW. Often times, we run our benchmark suite before viewing actual content. The test patterns we use lack too much detail to adequately differentiate the clarity of various displays. When we received this display, however, we were so taken by its styling that we put it on a desktop right away and were immediately struck by its razor-sharp image.

You've seen Tom's Hardware review a good number of QHD screens this year, and you already know that it's our new standard for desktop displays. The extra screen real estate afforded by a pixel density of nearly 109 ppi makes most tasks much easier. But we've also noted that most monitors need some form of scaling to make text easier to read. Windows 7 does a very poor job of this. Even though fonts are enlarged, character edges get so distorted that the experience is akin to looking through smudged spectacles. Finally, we resorted to using the scaling built into most applications, which almost always offers better performance. With the new PXL2790MW, we quickly discovered there was no need for scaling in any program. The image is so clear that even the smallest text is fully legible.

We had an educational conversation with one of Planar’s product managers about the PXL2790MW. He spoke to us about the company's research, which of course indicated that most computer users want a high level of luxury and quality in a display. Once someone works with a large, high-pixel density monitor, they don’t want to go back to a lower-res 21-inch screen. We've been saying that for years!

While QHD screens are becoming more common, their prices still tend to hover above $600, with gray-market Korean monitors being the exception. We tested Auria's EQ276W and found it to be a decent-performing display. But if you want high-end build quality and reliable factory support, you have to look at more mainstream brands.

How does Planar achieve such a sharp image? There’s nothing in the company's specs able to answer this, except maybe the high brightness. But that’s not it. The company did something unique with this new screen called layer-bonding; and it’s something we’ve never seen before.

Although Planar is using an LG AH-IPS panel in the PXL2790MW, the way it’s integrated with the front protective layer is unique. In most displays, there is a small air gap between this layer and the LCD panel. Planar is bonding them together, eliminating the gap. The result is significantly greater clarity. And this isn't a gimmick; we noticed it as soon as we turned the monitor on. Not only is it exceptionally bright, but the sharpness of even the tiniest text is greater than displays with a typical anti-glare screen coating.