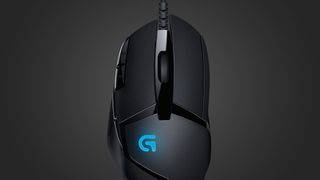 While it’s not uncommon to see the G402 hovering around $30 -- Best Buy and Walmart are also running similar deals right now -- Target’s deal is on the lower end of what’s available right now.

Logitech G402 Hyperion Fury: was $59.99, now $21.49 at Target
The Logitech G402 Hyperion Fury gaming mouse is a 4,000 max CPI mouse with 8 programmable buttons, on-the-fly DPI switching, a 1ms reporting weight and LED lights that both decorate the mouse and relay CPI information. It weighs 0.24 pounds without its 6.8 foot cable and has a 32-bit Arm processor for assigning macros.
View Deal

The Logitech G402 is a wired mouse with 8 programmable and macro-capable buttons, on-the-fly DPI switching, a 1ms reporting rate and a max CPI of 4,000. It also weighs 0.24 pounds without its cable (0.32 with) and has LED lights both for decoration and to display CPI information.

Essentially, the G402 is a more affordable and less tricked-out version of the company’s popular G502 Proteus Core gaming mouse (which has its own subreddit and got a wireless version in the Logitech G502 Lightspeed last year), my two-person household’s go-to mouse.

This discounted mouse's light weight, size, comfortable feel and strong basic feature set help it overcome its age. If you're looking for the best gaming mouse on sale right now, it's hard to beat the G402 Hyperion Fury.