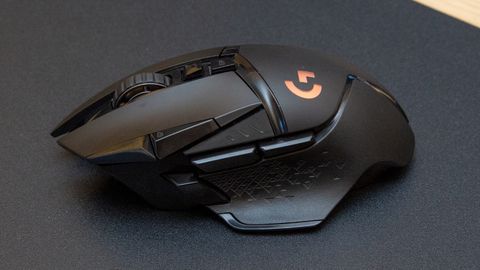 The Logitech G502 Lightspeed updates a classic gaming mouse, giving it long battery life and lighter weight, but it’s on the pricey side.

Sometimes you can’t beat the classics. But you can reimagine them. The Logitech G502 Lightspeed takes one of the company’s most loved gaming mice and makes it lighter, faster and wireless. The $149.99 (£129.99) mouse is specced to the gills, with support for the company’s Powerplay charging mouse pad and even a bit of RGB lighting. But Powerplay gets in the way of weight customization, and at $150, it’s expensive for a mouse.

Here’s the small miracle that Logitech pulled it off: The G502 Lightspeed, though completely redesigned internally, is a dead ringer for the old G502 Proteus Spectrum. If you cut the wire off of the old model, you’d basically have the LightSpeed. It’s impressive. Logitech’s most popular, ergonomic gaming mouse looks the same despite some serious re-engineering.

So let’s be clear. This is a right-handed gaming mouse with gaming trappings: an angular, matte black design, two RGB light zones (one of them is the Logitech G logo), plus stripes and rubberized accents that are functional, but also give the mouse an edgy look.

There’s still a rubberized, U-shaped rest for your thumb, a comfortable rounded hump and elongated buttons that feel good in both a claw and palm grip. And all of this weighs less than the old wired model at just 114 grams (4.3 ounces), despite the battery inside.

The weight, by the way, is customizable. The weight system is on the bottom and highlights some of the biggest changes to the mouse. If you prefer a heavier mouse or want to weigh the mouse more to one side or the other, you can add an additional 16g via two 4g weights and four 2g weights.

The larger weights fit in a pop-out puck (more on this puck below), and a plate around the sensor reveals room for the smaller weights, which you can put in four different compartments.

The G502 Lightspeed is also compatible with Logitech’s Powerplay wireless charging system (more on that later). If you opt to use that, you need to replace the puck that comes with the mouse with a wireless charging puck. That means that if you use wireless charging, you can’t add the 8g of weight to the back.

Some die-hards may notice that the scroll wheel, which was made entirely of metal on the original G502, is a little less beefy this time around. It has a rubberized grips and feels really light. As with the original, there’s a button to switch between smooth and clicky, notched scrolling.

With 11 programmable buttons, the G502 Lightspeed is equipped for any game. It has the basic form factor for a first-person shooter, and it worked great when I played Overwatch. It was fast and responsive, and the DPI button near where my thumb rested let me take easy, precise aim at opponents.

Those extra buttons along the side are also opportunities to customize for MMOs, to load up lots of spells.

The HERO 16K sensor, 100 - 16,000 DPI sensitivity options and 1,000 Hz polling rates provide plenty of options for gamers, and makes it great for both shooters and strategy games, especially when you assign DPI adjustment to the buttons.

And while I didn't notice any lag while using the Lightspeed, you can always connect the detachable cable if you're worried about that kind of thing.

At the expense of adding some weight, the G502 Lightspeed is compatible with Logitech’s Powerplay charging mouse pad, which plugs into your PC via USB Type-A. This is primarily how I used it, so I didn’t need to worry about charging it. (For those using it without the charging mat, Logitech claims 48 hours of use with default lighting and 60 with no lighting.)

The G502 Lightspeed is compatible with Logitech’s G Hub software, where you have the ability to reprogram buttons, customize RGB and adjust DPI sensitivity. So those who want to get really fine-grained with their rodent personalization will be spending a good amount of time here.

In G Hub, you can even create different profiles and have your customizations ready for different game genres or for productivity. I had one set up to open a screenshot utility on my desktop, for instance, though in game you're more likely to map certain moves, skills, items, abilities or commands to a button. There’s also macro recording functionality.

It’s hard to find much to dislike about the Logitech G502 Lightspeed, other than the price. The classic design is ergonomic and comfortable, the weight is adjustable and, of course, it’s wireless. It has long battery life, and if you have a Powerplay charging mat, you won’t ever have to worry about plugging it in.

But Powerplay means you can't use some of the weights, which limits your customization options. It’s a shame both features couldn’t be fully implemented. Plus, $150 is a lot to spend on a mouse. And if you want to also opt for the wireless charging mat it supports, that tacks another $100 onto the price. Corsair’s Ironclaw RGB Wireless, for instance, is $80, and a Razer Mamba wireless is about $100.

But for all of this customization and comfort, you may gain a bit of an edge, and that may be worth the splurge. And for those who can’t quite justify the price but still like what the G502 Lightspeed brings to the gaming table, keep an eye out for sales. Logitech’s peripherals frequently go on sale with substantial discounts at both online stores and places like Best Buy in the U.S.

MORE: How to Completely Disable Mouse Acceleration In Windows