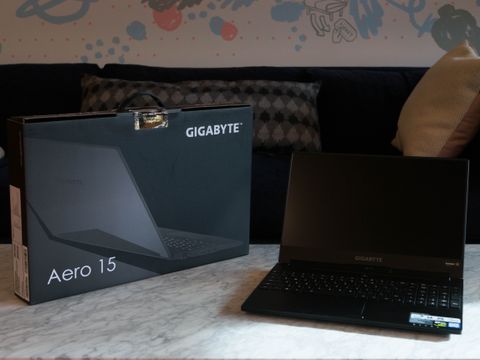 We've reviewed quite a few laptops with Nvidia's Max-Q technology of late. The MSI GS63VR 7RG Stealth Pro is the thinnest and lightest of the bunch. The Acer Predator Triton 700 has an impressive LED-bling suite and a glass touchpad. The Asus ROG Zephyrus features an innovative bottom cooling hinge that complements its thermal performance. The Gigabyte Aero 15X had an uphill battle to shine against the competition. We're compelled to believe that Gigabyte brought its A-game to the fight.

The Aero 15X hit solid ground in most of our synthetic tests. CPU-bound benchmarks such as 3DMark's physics tests and Cinebench's single- and multi-core tests illustrate the Aero in a competitive light, considering that five out of six of the laptops in our roundup contain an Intel Core i7-7700HQ. The only system that definitively outclassed the Aero 15X in CPU performance was the Aorus X7 DT v7, thanks to its overclockable CPU. In GPU-heavy tests, the Aero 15X evenly matches the MSI Stealth Pro and frequently gives the MSI Raider a run for its money. The 256GB Samsung SM951 SSD provided great 4K random and 128K sequential speeds.

However, we care most about gaming performance. Our suite features many platform-based tests, which saw the Aero 15X performing well against the MSI Raider and its standard GTX 1070. However, GPU-reliant benchmarks are Max-Q's biggest pitfall; in titles like Metro: Last Light Redux and Rise of the Tomb Raider, the performance difference between the Aero 15X and the Raider are more pronounced. In some cases, the reduced power draw can mean the difference between reaching 60 FPS or not.

Thermal dissipation is always a primary concern when dealing with gaming laptops, especially when the laptop is marketed as thin-and-light. The Aero 15X is considerably thinner and lighter than a laptop with a standard GPU, and thus has a smaller cooling solution to work with. On the other hand, it's still thicker than the rest of the Max-Q laptops in our roundup, tying with the MSI Raider for second place. The Acer Predator Helios 300 runs 10° C cooler, but it has a much weaker GTX 1060 and more cooler real estate.

One of Nvidia's promises with Max-Q GPUs is the lesser power draw in comparison to its fully fledged counterparts, and Nvidia has upheld its end of the bargain. Therefore, battery longevity is left in the hands of laptop vendors; their implementation can make or break a laptop's battery life. In our first few Max-Q laptop reviews, we noted that the thinner profiles of these laptops negatively affected the size of the battery that can be installed. As such, the power savings were effectively cancelled out by size restrictions. This isn't the case for the Aero 15X; Gigabyte managed to cram a massive 94.24Wh lithium-ion battery into its chassis. For reference, the same capacity can be found in the Aorus X7 DT v7 and caters to the power-hungry GTX 1080. Combine this large battery with a Max-Q GPU, and you have yourself a laptop that delivers more than 2 hours and 30 minutes of uninterrupted game time.

Another area of praise is the Aero 15X's 15.6" FHD IPS display. Words can only begin to describe how well it performs. It has everything: great contrast, RGB levels balanced just right, balanced saturation, and virtually imperceptible grayscale and color errors. The Aero 15X has the best display out of all the gaming laptops we've tested to date. Our only gripe is the rather modest 60Hz refresh rate. Competing Max-Q laptops have 120Hz displays, allowing gamers to take advantage of higher frame rates.

The Gigabyte Aero 15X's build quality is superb, though the look is rather bland versus its competition. The plastic-and-metal construction is rather understated, and the most noteworthy aesthetic is the carbon-fiber pattern on the lid. On the other hand, the Acer Triton features a more aggressive design with lighting elements on the lid and on the exhaust fans behind the glass window. The MSI Stealth Pro features a sleek brushed-aluminum finish and is considerably lighter. At the end of the day, aesthetics are subjective, and some gamers might want a laptop that hides under the radar.

At the time of writing this review, the Aero 15X will set you back $2,300, which is competitively priced as far as Max-Q laptops go. However, it doesn't offer the most raw value if pure gaming performance is your main metric. The MSI Stealth Pro comes in at $2,000 and offers similar synthetic and gaming performance at the cost of slower storage speeds, much lesser display quality, and lesser build quality. For the same price as the Aero 15X, you can buy the MSI Raider, whose standard GTX 1070 slightly outperforms the Gigabyte in gaming metrics.

When considering price, you have to consider what you value most. You can buy similar gaming performance for $300 less or slightly better performance at the same price, and both of those machines come with a higher-refresh display, making gaming all the more satisfying. On the other hand, a casual gamer who needs an accurate display for color-related applications such as Photoshop will value the Gigabyte's outstanding display first and foremost; the additional battery life is icing on the cake. To our eyes, these factors justify the additional $300.