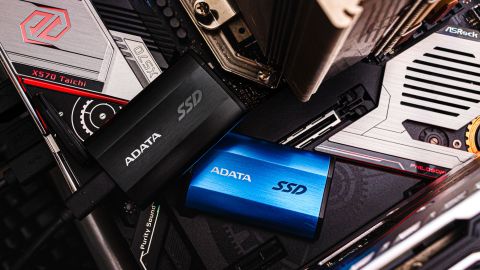 We pit Adata’s SE800 against some fierce competition. From Samsung, we include the 10 Gbps T7 Touch as well as the Thunderbolt 3 powered Samsung X5. As some of the fastest and priciest 10 Gbps SSDs in the bunch, we included the SanDisk Extreme Pro and LaCie Rugged SSD. We threw in the Crucial X8, a QLC NAND based 10 Gbps competitor as well as the 5 Gbps SanDisk Extreme for some value perspective, and WD My Passport HDD to show why you don't want to go the hard drive route if speed is of any concern.

DiskBench is a storage benchmarking tool that allows us to test the transfer or copy performance of a storage device with real data. We test portable drives with three file transfers that consist of 25GB of photos (10GB of jpgs and 15GB of RAW photos), 50GB of movies, and 25GB of documents. First, we transfer each folder from a 1TB NVMe SSD to the portable device; then we follow up by reading a 3.7GB 7-zip file and a 15GB movie back from the device.

Adata’s SE800 scores just behind the Samsung T7 Touch in write speed, averaging 1-3 seconds slower during the file transfers. This ranks it into sixth place in write performance, but stronger read performance over the LaCie Rugged SSD ranks it into fifth place for reads. While not the fastest of the bunch, the Adata provides a better experience on a 10 Gbps port than the 5Gbps SanDisk Extreme and is vastly superior to a slow (but cheap) HDD.

PCMark 10 is a trace-based benchmark that uses a wide-ranging set of real-world traces from popular applications and common tasks to measure the performance of storage devices. To test drives that store files rather than applications, we utilize the Data Drive Benchmark.

Adata’s SE800 scores fourth place in PCMark 10 scores, proving itself to be quite responsive to the workload. Even lacking DRAM, it outpaces the SanDisk Extreme Pro and manages to best the T7 Touch, too. And, compared to the HDD, it provided three times faster performance at handling the file-transfer based workloads.

Measuring sequential performance, the SE800 peaked at 969/958 MBps read/write. At QD1, it exhibits an extra 0.1ms of latency over the T7 Touch in small block reading. So, a bit less responsive for small file reading, but write performance has been tuned to be quite good.  That said, it hasn’t been tweaked to be as good as Crucial’s X8, which exhibits very consistent and more responsive performance in lighter workloads.

Write speed and temperature are two important and interrelated metrics for portable devices. We threw in this one last test to measure the performance of the drive over a 15-minute window, writing to the full span of the drive. This test reveals if the drive has a pseudo-SLC cache, which is a small portion of faster-programmed flash that absorbs incoming write workloads. We also monitor cache recovery via multiple idle rounds.

As we expected, the SE800 features a write cache. After about 12GB of writes, the cache fills and performance degrades to about 800 MBps. After about 3 minutes, that performance degrades another step, down to about 680 MBps. This is significantly faster performance than what the Crucial X8 exhibits after its cache fills and helps it gain the lead over the Samsung T7 Touch. Within about a minute of idle, the write cache replenishes, too.

Additionally, the thermal performance was adequate for average use. After writing a few hundred GB, the unit was about 45 degrees Celsius on the surface, but the SSD controller within was reporting over 80 degrees Celsius after about writing about 70GB in our test.