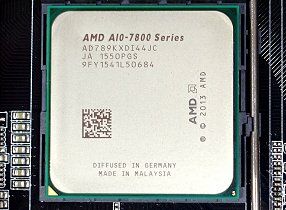 What do you do when you've announced new technology, but aren't expecting it to be ready for a while? In AMD's case, the Summit Ridge CPUs and Bristol Ridge APUs won't show up anytime soon, so the company needs something to tide it over in the meantime.

AMD's new A10-7890K APU is supposed to bridge the gap. Compared to the A10-7870K, it enjoys a 200MHz bump in clock rate and includes the beefy Wraith cooler. The processor is aimed at those who play a lot of online games and don't really need discrete graphics.

The Kaveri architecture, and its small evolution to Godovari, is as mature as it can possibly be. However, AMD decided to give its fans an encore. What's supposedly makes this possible are small improvements to the 28nm process, which is plausible given AMD's long history with these APUs and their architectures.

AMD's Wraith cooler is designed to deal with up to 125W of waste heat. Consequently, it shouldn’t have any trouble with AMD's 95W APU (though, in fact, the -7890K actually exceeded 125W in some of our testing).

Thanks to the clock rate bump, AMD's new APU ends up offering a theoretical 1.02 TFLOPS of compute performance, crossing the 1TFLOPS threshold so long as there's no graphics workload. We have a special test just for this scenario, and it'll show why it's so hard for AMD's APUs to strike a good balance between their host and graphics processing capabilities.

Before we introduce our test PC, which we configured specifically for AMD's target group, let's take a look at the most important members of AMD's x86 Steamroller-based family:

Building A PC For Online Gaming

Working over an open bench table does get boring after a while, so we decided to take AMD at its word and build a PC around its APU that's both inexpensive and offers optimal performance for games like Dota 2. This system is the foundation for all of today's  benchmarks.

We settled on an ATX motherboard, since we just couldn't find a suitable alternative. It's just not that easy to find a compact platform with a Socket FM2+ interface and DisplayPort connectivity. Of course, DisplayPort was required for testing FreeSync. Our 24-inch AOC G2460PF is perfect for this kind of setup.

If you can live without FreeSync, there are good motherboard alternatives. For instance, you'll find mini-ITX boards for small systems selling right around $50.

After a discussion with Caseking, we decided to go with the Aerocool GT-RS ATX Cube chassis. It's a relatively inexpensive dual-chamber enclosure that toes the line between mid-tower and cube. Its $75 street price should work for lower budgets, too.

To complete our light gaming PC, we used a DVD drive that can be installed vertically and an inexpensive 240GB SSD from Crucial. This setup, or a variation thereof, should be perfect for occasional gamers, so long as they understand the limitations of AMD's APUs and are willing to live with them. As the story progresses, we'll go into more depth on what exactly those limitations are.