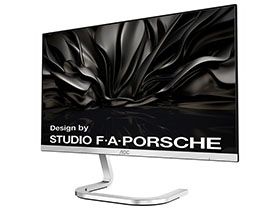 Since there are no picture modes or calibration options available for the PDS271, we need only a single set of charts to show its grayscale, gamma, and color performance.

Grayscale tracking runs slightly green, and the errors are visible if you look closely. Red seems to remain at the neutral point, while blue drops below the line, and green rises above as the signal level increases from 30-100%. If RGB sliders were available, one or two clicks would likely fix this issue.

Gamma tracks fairly well with an infinitesimal dip at 10%, slightly dark values from 20-80%, and another dip at 90%. You can take care of the latter with a one-click drop in the contrast control, but we don’t think it’s worth the loss of even a little dynamic range. This is good performance.

As we mentioned on page one, the PDS271 is a DCI-P3-native monitor. If you need sRGB, there is no option in the OSD, so all your content will look more vivid and saturated. This can be a good thing if absolute accuracy and color neutrality are not a priority. We liken it to the vivid or bright mode found in many monitors and televisions. Everything looks bolder but sometimes seems a bit unnatural.

Color saturation is mostly on target with the blue and green primaries being slightly under. You can also see hue errors in the magenta secondary. Luminance levels are neutral except for red, blue, and magenta, which drop below the line as saturation increases. Resulting errors are nearly all invisible and the ones that are visible only just cross the 3dE threshold. Considering the PDS271’s intended use, this is acceptable performance.

Green errors are the spoiler that push the PDS271 to an average grayscale tracking value of 5.42dE. That’s a bit higher than many monitors we’ve reviewed. Obviously, calibration improves the rest of the field to a much lower level, but the AOC is still stuck with its flaws.

Gamma tracks reasonably well with a .26 range of values. Compared to our entire database, that’s a decent score, but today’s group outperforms it by a small degree. A 2.27% deviation from 2.2 means the average value is 2.25, just a tad dark, but not enough to damage picture quality.

An average color error of 3.49dE is also pretty good, but again the PDS271 is up against some very competent displays. It should be noted, though, that none of them can hit DCI-P3. While that gamut isn’t really a factor in gaming or most video content, it does provide some added punch that some users may prefer. We recommend you try before you buy.

That large native gamut means the PDS271 exceeds sRGB volume by nearly 20% and comes up around 18% shy of Adobe RGB. Compared to DCI-P3, measured volume is 86.35%. The deficiency occurs in the blue and green primaries, which are under-saturated.

Prev Page Brightness & Contrast Next Page Viewing Angles, Uniformity, Response & Lag
11 Comments Comment from the forums
Be In the Know