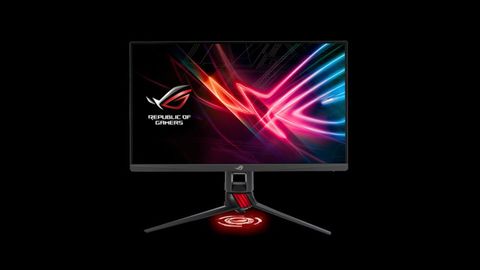 An HDR signal automatically switches the XG279Q to its HDR mode, where you’ll find two picture modes available. All other image options are grayed out, but you still have access to adaptive sync and the 170Hz refresh rate.

The XG279Q easily achieves its DisplayHDR 400 certification, with nearly 580 nits of peak brightness. Dynamic contrast via backlight control is activated so black levels are super-low at just 0.0215 nits. Resulting HDR contrast is an impressive 27,007.6:1. Asus makes good use of dynamic contrast here and manages to preserve highlight and shadow detail. That’s a good thing because the feature can’t be defeated. You’ll see the effect in the EOTF test.

We tested both Gaming and Cinema HDR and found Gaming to be a bit more accurate. Its grayscale tracking is good, with just a few slight green errors above 50% brightness. The EOTF curve is skewed below the tone-map transition point thanks to the XG279Q’s dynamic contrast feature. Though some dark content can be a little murky, detail is always visible. The net effect is a good one with plenty of image depth and deep blacks. Cinema HDR makes a smoother transition to tone-mapping and looks a bit darker overall. Its green errors are more visible, especially at 70% and higher. We stuck with Gaming for the hands-on tests. The two modes measure almost identically in the gamut test.

Prev Page Grayscale, Gamma and Color Next Page Viewing Angles, Uniformity, Response and Lag
4 Comments Comment from the forums
Be In the Know