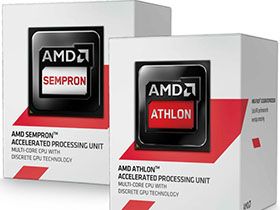 The AM1 Platform: Kabini Surfaces On The Desktop

AMD started banging the Accelerated Processing Unit (APU) drum shortly after purchasing ATI. But it wasn't until the company introduced its Jaguar architecture that we saw uptake really garner the big headlines. In rapid succession, AMD found its hybrid technology in the Xbox One, PlayStation 4, and E- and A-series Mobility APUs (code-named Kabini and Temash) for mobile devices running Windows.

If you're not familiar with the Jaguar design, it's an evolution of AMD's Bobcat architecture, which we first looked at back in 2010. The goal this time around was to improve Bobcat's modest performance by augmenting the amount of work it could do per clock cycle. AMD also gave Jaguar support for more modern instruction set extensions like SSE 4.1/4.2 and AVX. Of course, in the process, APUs equipped with Jaguar get an updated on-board graphics engine. Gone is the VLIW-based design prevalent in Radeon HD 6000-and-newer GPUs, replaced by Graphics Core Next.

The Kabini-based APUs leverage up to four Jaguar cores and as many as 128 GCN-based shaders. If you want more technical depth on that processor, have a look at AMD's Kabini: Jaguar And GCN Come Together In A 15 W APU.

Almost a year has passed since our first look at Kabini. Originally, AMD positioned the APU as mobile-focused, ideal for low-power devices wielding the flexibility of x86. More recently, the company revealed its intention to sell the chip into a desktop platform called AM1 as well, built around its FS1b processor interface.

Of course, AMD's marketing machine is aflutter, calling AM1 the world's first "system in a socket," since Intel's Bay Trail-D design isn't upgradeable. It's an embedded configuration with a soldered-down SoC. Indeed, most of the Bay Trail-equipped boards we've seen so far appear best suited to industrial applications. In contrast, AM1 motherboards seem more desktop-like, supporting up to 16 GB of DDR3 memory and accommodating active cooling.

AMD is shipping AM1-capable APUs under the company's Athlon and Sempron brands. Currently, all of the available models are rated for 25 W and feature 128 shaders, although the graphics engine ranges from 400 to 600 MHz, depending on the specific implementation. Three of the four chips come with four cores and 1600 MT/s memory support, while the lowest-priced Sempron 2650 is a dual-core version with a 1333 MT/s transfer rate cap. Core frequencies range from 1.3 to 2.05 GHz, which does serve to hold back performance. Then again, Intel is shipping similar to slightly higher clock rates on its Silvermont-based CPUs (Intel Silvermont Architecture: Does This Atom Change It All?).

At least in this segment, AMD and Intel are topping out with four cores (the Jaguar architecture can continue scaling, as it does in the Xbox and PlayStation, while Silvermont does as well in the Atom C2000 family). Intel's solution uses less power. However, the company's HD Graphics engine is also less capable. And memory support is limited to 1333 MT/s across the Bay Trail-D platform.

We'd expect AMD's socketed Kabini platform to be faster than the competition from Intel, based on all of those specifications, though Bay Trail-D may be more efficient. Let's take a closer look at the hardware for more detail.

Current page: The AM1 Platform: Kabini Surfaces On The Desktop

Next Page One Bay Trail-D And Two AM1 Motherboards