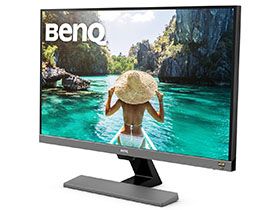 To take full advantage of what HDR10 has to offer, you’ll need to either put a 55” Vizio (or an LG OLED if you’re well-funded) on your desk or spend a lot of money on a multi-zone backlight monitor. For under $300 though, you can enjoy BenQ’s EW277HDR. If you’d rather not wait for prices to come down on professional-grade computer monitors, this one offers superb color accuracy and reasonable HDR today. It may not be compatible with every source device so check your gear before buying. But at this price point, it’s hard to beat.

Depending on who you talk to, HDR is either coming or it’s here already. Clearly, there are many HDR-capable televisions and monitors filling the aisles of big box stores and the virtual shelves of our favorite online merchants. But how many of them can truly do justice to the standard? That’s a question we’ve explored already in our reviews of Dell’s S2718D and UP2718Q. Both support HDR10, but their implementations are as different as night and day. The former makes do with an IPS panel with an edge-array backlight and fairly low native contrast. The UltraSharp model uses a 384-zone backlight and can top 1000nits when measuring a 10% window. It also boasts over 17,000:1 contrast in HDR mode. Which do think is the better screen?

Of course, that kind of performance doesn’t come cheap, and BenQ is offering a compelling compromise with its EW277HDR. It accepts HDR10 signals and offers an HDR-emulation mode for standard content. It also sports a DCI-P3 color gamut with options for sRGB, Rec.709, and several other specs. All of this is wrapped in a slim package that costs less than $300 at this writing. Let’s take a look.

The EW277HDR nearly aspires to be a professional display, but it comes up a bit short of that label. BenQ calls it a “Video Enjoyment Monitor.” But it has multiple color modes that in our tests measured right on spec. In fact, we didn’t even bother to calibrate it, it’s that accurate.

To keep costs down, there are two major omissions: a multi-zone backlight and Ultra HD resolution. The LEDs are arrayed at the edges, which eliminates any possibility of useful dynamic contrast. Recall that in our review of the Dell UP2718Q, its 384-zone backlight was responsible for a true 1000-nit output and 17,000:1 contrast in HDR mode. BenQ addresses contrast with an excellent VA panel part that delivers 3000:1 natively. That’s a major step forward from IPS’s 1000:1. The EW277HDR won’t hit 1000 nits, but HDR mode ups output to 400cd/m2.

The EW277HDR’s 1920x1080 resolution is a bit of a head-scratcher until you look at the price tag. And since it’s exactly one-fourth the pixel count of Ultra HD, the down-res doesn’t look too bad at normal viewing distances.

The other component needed for good HDR is extended color, and this monitor has it in the form of a DCI-P3 native gamut. BenQ claims 93% coverage, and our test results came close to that. Of equal importance is the EW277HDR’s accurate Rec.709 mode. You can select that gamut so your standard content looks correct. And if you want to apply a gamma shift to make the picture more HDR-like, there’s a handy button right on the bezel to make that happen. Also in the mix is an ambient light sensor that can vary brightness and color temperature automatically. BenQ calls it Brightness Intelligence Plus.

We’re looking at a unique display that sells for a very low price. Our tests will include the standard contrast and color benchmarks plus a full evaluation of its HDR10 capability.

We’re used to well-built displays from BenQ, so we were a bit surprised at the lightness of its carton. Fear not though, the usual standard is upheld. Despite weighing just over nine pounds, the EW277HDR is a solid piece with secure packaging to match. The panel, upright, and base are separate pieces but can be assembled without tools.

The accessory bundle includes a high-bandwidth HDMI cable and a power supply brick. To properly support the 18 Gb/s HDMI 2.0 inputs, use the included cable or a good-quality one of your own. The user’s manual comes on a CD.

While we may have truly bezel-free monitors someday, that day is not yet here. The EW277HDR comes close though, with only a 7mm frame around the top and sides of the image. The screen is flush-mounted so it looks like a plain black panel when turned off. The anti-glare layer is very effective at controlling reflections and imparts no grain or other artifacts. Tiny text and detail is plainly visible and always sharp without added edge enhancement.

The bottom strip is wider at just under an inch and features an HDR button prominently in the lower-right corner. This key toggles HDR emulation along with Brightness Intelligence Plus (BI+), which uses a sensor to vary output and color temperature according to ambient lighting conditions. The remaining controls consist of buttons along the bottom of the panel whose functions are indicated by on-screen icons. In the center is a small sensor that supports the BI+ feature. It can be turned on or off in the OSD.

The EW277HDR’s side profile is kept slim thanks to an external power supply. There are no USB ports here, nor are they on the rear-facing input panel. There is also no provision for a VESA mount. The included stand has its fulcrum at the bottom and provides 5° forward tilt and 15° back. There is no height or swivel adjustment, nor is there a portrait mode. Movements are firm and solid despite the monitor’s light weight. Good build quality doesn’t have to be heavy as BenQ amply demonstrates.

Inputs consist of two HDMI 2.0 ports with HDCP 2.2 content protection. You also get a VGA port, though it’s hard to imagine anyone using it. Nonetheless, it is supported in the OSD with full analog signal adjustments. The built-in speakers fire out two small grills in the back and play at polite volumes without distortion. If you want to use headphones or the line input from your computer, there are two 3.5mm jacks provided.